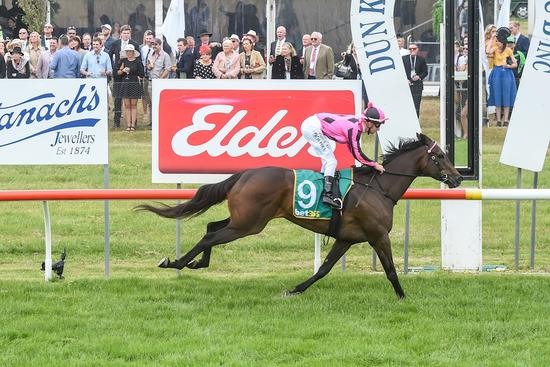 The only surprise about Vahvuus’s victory at Dunkeld on Saturday was that it took so long for her to win her maiden.

The four-year-old mare had won two barrier trials, including one in June, soon after joining Emsley Lodge, but it took her seven starts to transfer that form into a race success.

“She has always galloped up strongly on the track and really we thought she would have won her maiden before now,” trainer Jamie Edwards said.

Last July at her stable debut, Vahvuus finished second when odds-on ($1.90) at Tatura but despite the defeat punters stuck with her.

Her longest starting price was $6 when well beaten at Warrnambool on a soft track three starts ago before finishing a close fourth when $2.50 favourite at Traralgon on Derby Day.

“I was really disappointed she didn’t win at Traralgon,” Jamie said.

“She loomed up and looked the winner but didn’t finish off over 1100 metres.”

On Saturday, Vahvuus enjoyed the 1000 metres of the Ruth Margaret Anne Roberts Maiden (1000m) and settled much better behind the hot pace compared to previous runs in slightly longer races where she has been up on the bridled and been found wanting at the finish.

On the home turn she coasted up to the leaders three-wide and quickly opened up a 2-1/2 lengths lead into the straight, extending the margin to six lengths at the post. Hunka Hunka Harry finished second a nose ahead of Deforce.

“She was five lengths off the lead early but she had them covered on the turn,” Jamie said.

“That was form we knew she was capable of producing and it was great to see her do it on race day.”

Interestingly, it was only the second time in her career that Vahvuus was been on a good turf track with her other runs on rain-affected ground except for when unplaced on a synthetic track.

“It certainly looks like 1000 metres and good tracks are what she needs,” Jamie said.