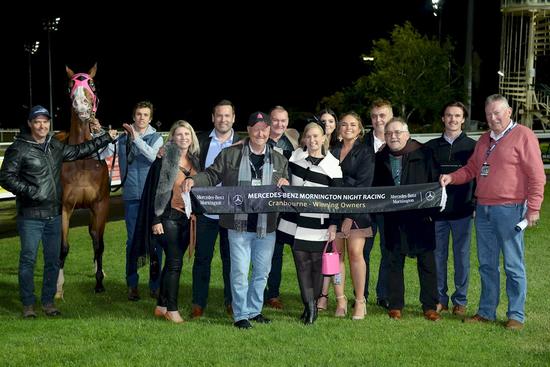 Punters were rewarded for sticking with Fill The Flute when she bounced back from her last start aberration at Moonee Valley to score at Cranbourne on Friday night.

Backed from $2.10 to $1.80 favourite the speedy five-year-old mare showed her customary dash to lead the five-horse field and to relief of her supporters fought back after being headed on the turn to land the Mercedes-Benz Mornington BM78 Hcp (1000m).

Trainer Jamie Edwards admitted he had conceded the race when Call It A Day drew a neck ahead of Fill The Flute but her superior fitness proved telling in the straight.

“She was gone on the corner, absolutely gone,” Jamie said.

The win was particularly satisfying for Perth-based part-owner Alan Hahn and his family who were at Cranbourne.

Jockey Jamie Mott was relieved when Fill The Flute rallied when he put her under the whip in the straight.

“I was in a little bit of trouble on the corner,” Mott said. “She really hit a flat spot and the other horse got a good neck on me so I was really banking on her fitness and she responded well.”

Fill The Flute scored in a photo finish from Call It A Day and Deep Euphoria.

Last start was a waste of time for the daughter of Statue of Liberty when as she missed the start and was unable to show her customary speed, settling back in the field and never threatening.

“She’s never before been last after they have gone 100 metres and we put a pen through the run,” Jamie said.

Unfortunately for Jamie Mott, his night soured two races later when he broke his leg in a race fall.