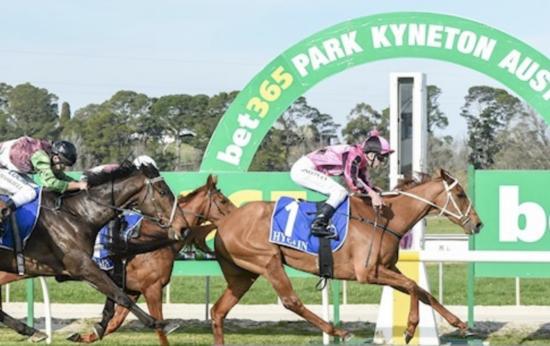 Pony-sized mare Young Hostess made it two wins from her last three starts when she shouldered topweight from the outside barrier to score over 2800 metres at Kyneton on Friday.

The smallest horse in the Emsley Lodge stable at just 419kg, the six-year-old mare with 60kg on her back defied a betting drift from $3.80 to $7 to land the L&G Sheppard and Sons BM64 Hcp.

Trainer Jamie Edwards said he had his doubts about Young Hostess handling the challenging task and was full of praise for her after the win.

“It is an amazing effort for a little horse like her,” Jamie said.

“People don’t realise how small this horse is, she is an absolute pony.”

Jockey Jake Noonan always had Young Hostess in a good position and responded brilliantly when asked to go after the leader Crafty Cruiser at the 600 metres.

In the home straight she was locked in a two-horse battle but edged ahead in the closing stages to score by a length from Hanaki Warrior who bloused Crafty Cruiser out of second place.

Jake said Young Hostess was always in the right spot throughout the race and was always travelling well.

“I was confident a long way from home and she got to them pretty easily,” Jake said.

Jamie said the win was a good trial for Young Hostess’s next assignment over 3000 metres at Moonee Valley in two weeks.

“She ran the 2800 metres right out which augurs well for the Valley where she drops 3-4kg,” Jamie said.

A genuine stayer, Young Hostess struck form when she won at $31 at Geelong over 2200 metres on September 1 and was gallant in defeat when second to odds-on favourite Creedence at Pakenham over 2200 metres in BM70 class 11 days ago.