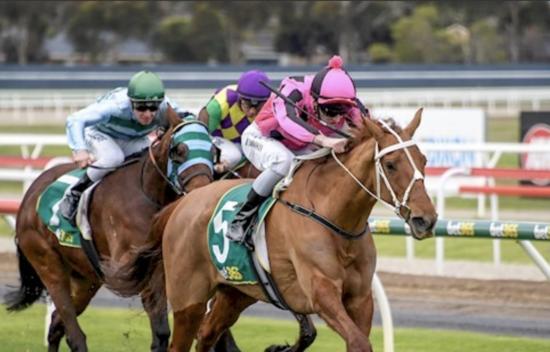 Staying mare Young Hostess broke through for her first Emsley Lodge win when she scored at Geelong on Sunday.

The six-year-old mare was having her third start since joining the stable late last season and appreciated the drop back in grade in the IGA Liquor Barwon Heads BM64 (2200m).

Ridden by Jake Noonan, Young Hostess enjoyed a soft run in second place in a slowly run race before moving up outside the leader on the home turn and taking the lead near the 200m metres.

At bolters odds of $31, she drew clear to win with authority by 1-1/4 lengths from Reliabelle and Spensierato, which augurs well for her coming spring assignments.

“That was third up today and should get better as her campaign progresses,” trainer Jamie Edwards said.

“The race panned out well for her today, but she is an out and out stayer.

“I expected her to be a couple of pairs further back in the run, but she was able to roll forward early and got into a nice rhythm.

“Jake summed the race up very well and she looked like she was going to be hard to beat a long way out.

Young Hostess was unlucky second up over 2400 metres last start when she got shuffled back mid-race but still looked a winning chance getting within a length of the leaders halfway up the straight before the effort told.