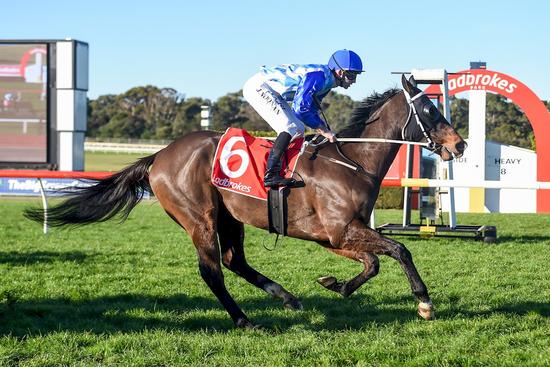 Five-year-old Aluf blasted his way to a career-best performance when he stormed home to land the Le Pine Funerals Hcp (1000m) at Sandown.

Having his first city start, the son of Moshe raced deep throughout from a wide gate and unleashed a powerful last 300 metres on the heavy track to score a 1-3/4 length win over Gibbon and Prezado.

Stablemate and 3-time city winner Fill The Flute led and battled on gamely to hold fourth place, 3.6 lengths from the winner.

Aluf’s jockey Jake Noonan has been an integral part of Aluf’s stunning rise through the grades since partnering him for the first time to a BM58 class win at Terang three months ago.

With Jake on board, the Aluf has won four of his last eight starts and he seems to be getting better with every run.

“They went quickly today and I settled a pair or two further back than anticipated but we got cover and he travelled well,” Jake said.

“I popped him out around the turn to give him a bit of room to build up some momentum and I was pretty confident a long way out.”

Aluf’s campaign started 12 starts ago and with four wins, five seconds and a third he has only missed a place twice since December last year.

“Early days we wondered whether he genuinely got to the line but gee he was good late today,” James said.

“He’s a lovely horse to have around and he just keeps stepping up.”