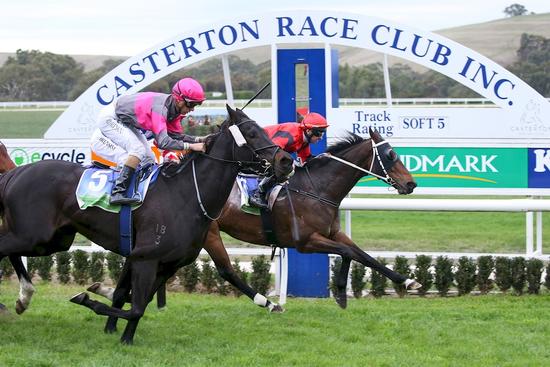 Young Douro added to his impressive recent record when he overcame a wide gate to lead all the way at Casterton on Sunday.

The five-year-old has been in red-hot form since wearing blinkers and posted his third win from last four starts in the McClure Earthmoving BM64 Hcp (1200m).

“He’s been racing extra well since we put the blinkers on him and it seems he just knows where the winning post is,” trainer Jamie Edwards said.

A market drifter from $6.50 to $8.50, Young Douro shot two lengths clear soon after straightening up and held off late challengers Duecourse and Fabian’s Spirit in a blanket finish.

Last start at Stawell, the photo finish was also needed when Young Douro, after being clearly headed, fought back strongly to win for a last stride victory.

Four starts ago he won easily at Edenhope.

Jamie said the small tracks suited the front running style of Young Douro who has won four of his 15 starts and $71,046.

“He’s getting through his grades nicely and today he was very good again with 59.5kg from the wide barrier.

“He worked hard early and was entitled to knock up, but instead he gave a good kick at the top of the straight and toughed it out.

“Blinkers have really turned his career around with three wins from his last four runs which is something not many horses can do.”

“I love the way he can get a couple of lengths of them cornering on the tight turning tracks and I’d like to stick to similar venues with him.”