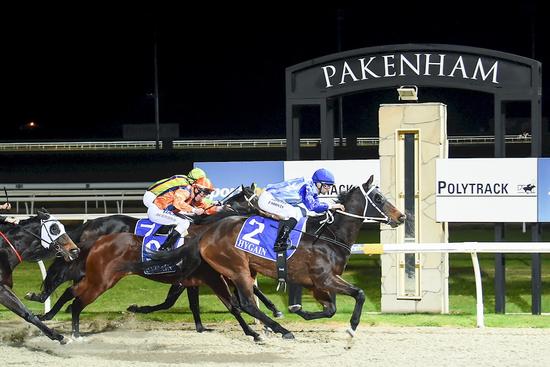 Aluf took another step in his remarkable progression through the grades when he finished strongly to post his third win for the year on Thursday night.

The five-year-old took his career earnings to nearly $140,000 with a half-length victory over Weekend Escape in the Nine Mile Fresh BM70 Hcp (1000m), less than a year after a senior rider declared that the gelding had found his level as a 58-grade horse.

This campaign Aluf has gone from strength to strength registering three wins, five seconds, a fourth and a fifth from 10 starts for $82,330.

The result has been a vindication for his owners who stuck with Aluf after weighing up their options with him last year.

“They are a great bunch of blokes and it’s great to see their faith being rewarded,” trainer Jamie Edwards said.

Jamie said a combination of factors had triggered the Aluf’s improved form.

“Five starts ago we brought him back to 1000 metres, blinkered him up and put Jake Noonan on and he hasn’t looked back,” Jamie said.

“The 1000 metres really suits him and being a big horse, he carries weight well.”

Together, Greg Welsh, John Davies and David Lyons bred Aluf from Umatilla mare Cazzuma who is also the dam of Aluf’s full brother and stablemate Humzz who finished third at Pakenham on Thursday night.

Raced in similar interests to Aluf, the lightly raced Humzz was resuming from a spell and after racing wide near the lead battled on bravely behind Sunrise Dancer and Shenanigan City.

Three-year-old Humzz won his maiden at Colac last December and has not finished further back than fifth in his five starts while Aluf has raced 27 times for six wins and 10 placings.