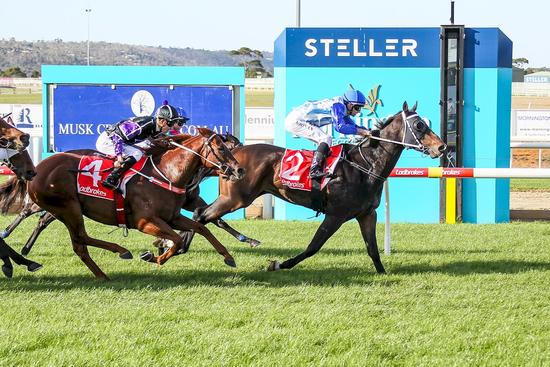 Moshe gelding Aluf shot his career earnings past $100,000 when he posted his second win a row at the track where he won his maiden more than a year ago.

Following up from a last start Terang victory shouldering a back-breaking 62.5kg, the five-year-old rose in class with 61.5kg on his back to land the Musk Creek Farm BM64 Hcp (1000m) at Mornington on Sunday.

Jake Noonan rode Aluf when he scored 15 days ago and praised the gelding after he was able to win again despite being caught three-wide without cover all the way under the big weight.

“I was planning to land one out one back and get a dream run but he just wanted to fight and get his head up so we sat three-wide.

“It was a big effort but he was the best horse.”

Aluf shared the lead on the home turn, and after hitting the front approaching the 100 metres, went on to score a three-quarter length victory over Endow and Segouin.

“They have got him focused,” James said. “It was a test for him today in a field with a bit of depth but he seems to love Mornington.

“He won his maiden here over the same distance and now he has his first win in 64-grade at the same track.

“He has a big group of owners who have been massive supporters of the stable and it’s great to see their horse go back-to-back for them.”

Aluf has won five races and placed another eight times for $101,958 in prizemoney from 24 starts.