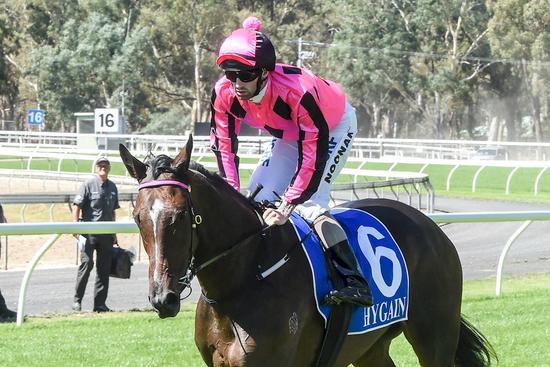 The late Bart Cummings idiom “of slow and steady wins the race” was an appropriate fit for Miss Matilda who scored an overdue maiden win at Seymour on Wednesday.

The four-year-old mare’s tendency to hang out around turns has been a problem but with the extra distance and mindful ride from Jake Noonan she led all the way in the Bar Landy Restaurant Maiden Plate (2200m).

The win at her 12thrace start broke a sequence of four 2ndplacings at her other runs this campaign.

“She is better than an 11-start maiden galloper,” trainer Jamie Edwards said.

“The whole problem has been her losing three or four lengths on the corner, but going up in distance from a mile, the last 600m was never going to be as quick and she handled the turn much better.

“The trick was how the Jake got her around the track he worked her out perfectly.”

Noonan said Miss Matilda was a “tricky mare” but she travelled beautifully from the 1400 metres.

“She actually balanced up really well and spat the bridle out and being left alone in front got into a good a rhythm.”

“I just needed to flow with her on the turn and in the straight, I think she would have found another gear had something challenged her.

Jamie said the daughter of Domesday should get 2400m.

Peter and Jenny Rafter along with John Carter race Miss Matilda who was the last foal the Rafter’s bred from their mare Miss Chaski who they sold a few years ago.

“We sold three or four of Miss Chaski’s foals at the Melbourne Premier sale but we kept Miss Matilda to continue with the family,” Peter Rafter said.

“The aim is to win a few races with her and breed from her one day.”

“We wanted her trained in a country environment near Geelong and the farm at Emsley Lodge was ideal,” Peter said.

“Jamie has done a great job getting her to settle and race handy in her races which gives her every chance.”