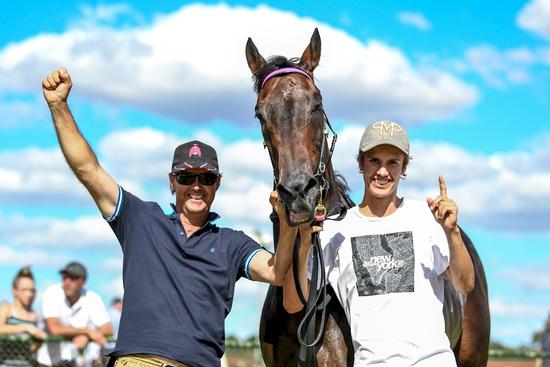 Veteran galloper Severn Road went one better than his age when the 10-year-old he posted his 11th career win at Edenhope on Saturday.

The gelding brought up a winning double for Emsley Lodge at the meeting with a dashing all the way victory at his 80thstart in the Bullarook Park Stud 0-58 Hcp (1850m).

Ridden by apprentice Tahlia Hope he had to work early to hold out The Shuffler who took him on for the lead, but he was able to get a breather mid-race.

After beating off The Shuffler on the home turn he put the race beyond doubt when he surged clear in the straight to score by 2-1/2 lengths from Press Release and Lady Dee Dee.

He was the second leg of an Edenhope winning double for Emsley Lodge after Young Douro won the previous recent.

“Today he was a giving the 2nd horse 5.5 kg but he just kept running and doing his best.

“Every campaign he keeps coming up and no doubt the farm (Emsley Lodge) has played a big part in his longevity on the track.”

A family favourite, Janet Edwards owns Severn Road who made his race debut as a three-year-old when he finished second at Hamilton in November 2011.

He won three of his next eight runs but his biggest win the 2013 Traralgon Cup. He has also placed in the Pakenham, Casterton, and Ballan Cups.

“He’s a beauty,” Jamie said. “Not many horses go on to race as 10-year-olds and even fewer win races at the age.”