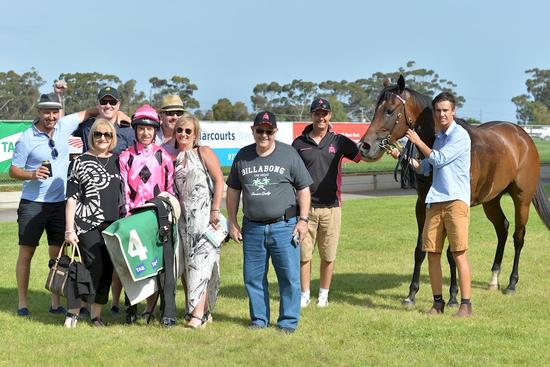 Lightly raced mare Minyinga is likely to get her chance in middle distance races this campaign after her narrow second-up win at Werribee on Saturday.

The four-year-old, who is on the comeback trail after having a bone chip removed from a knee, proved too strong in the Share The Upside with Spendthrift Australia F&M BM64 Hcp (1400m).

Ridden by Craig Robertson she was able to get across from her wide gate and sit in the 2-2 position before peeling out into the straight and hitting the front in the closing stages to score by a neck from Pria Eclipse.

Trainer Jamie Edwards said Minyinga had a lot of talent and that she was now giving the impression that she would handle much longer races.

“Initially we thought she was a 1400 metre horse but the more she races the more she looks like she will get over ground,” Jamie said.

“It was a grinding win at Werribee, and it would be no surprise to see her get 2000 metres especially as she is from a Street Cry mare (Rue De L’Amour).”

Minyinga’s owners have been patient and she missed most of her three-year-old season after having surgery on her knee in the 2017 spring and had another extended break after just one run in March last year.

She bounced back on the scene on Boxing Day at Geelong where she finished an unlucky second over 1100 metres and Jamie expects her to take further improvement from her Werribee victory.

“We have looked after her and she looks fantastic, but I would not expect her to peak until her fourth run this prep,” Jamie said.

“Her next start would be over a mile at Moonee Valley which provides a springboard to get her over 2000 metres.”

Minyinga was Emsley Lodge’s 22nd winner for the season and stable sits 14thon the Victorian trainers' premiership with a strike rate 17.95% which is the third best of the top 20 trainers.