Humzz hits back with Colac victory 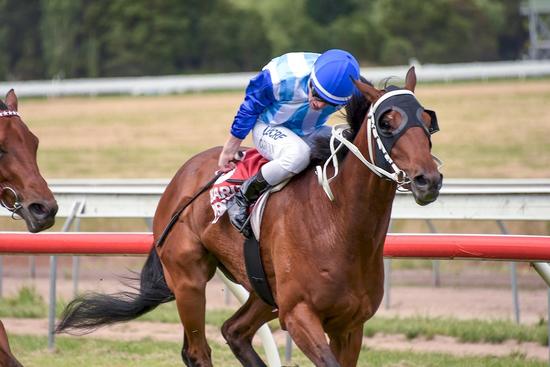 A dashing ride from in-form jockey Dylan Dunn paid off with Humzz making amends for two recent luckless runs with a tenacious win at Colac on Saturday.

The three-year-old went forward from his outside barrier to be on the pace and fought back bravely after being headed in the home straight to score a narrow victory in the Greg Allan Farm Machinery 3YO Maiden Plate (1200m).

French Fizz, who threatened to pinch victory finished second in the photo finish and Don't Wait was third.

Trainer Jamie Edwards said Humzz deserved the win after the three-year-old had been unlucky at his first two starts.

“Dylan got him going early and he travelled keenly outside the leader before he hit the front on the turn and gave a good kick into the straight."

However, Humzz gave his supporters a scare when he ducked in under the whip near the 150m and was headed as Dylan stopped riding to straighten him, losing about a length.

“The second horse probably got a good half-length or so in front of him, but he fought back to regain the lead which is something you don’t often see young horses do,” Jamie said.

Jamie said Humzz probably would have won his first two runs, but he slipped at the start at his Dunkeld race debut and three weeks ago was beaten a half-length after racing wide all the way at Wodonga.

A son of Moshe, Humzz is the sixth winning foal from Umatilla mare Cazzuma and is raced by his breeders Greg Welsh, David Lyons and John Davies along with a group of friends.

Most of the owners also race Humzz’s brother and stablemate Aluf who finished a gusty first-up fourth at Colac.

“This a nice Christmas present for a great bunch of owners,” Jamie said.

Notably, Humzz was the first of a remarkable six winners from six rides for Dylan Dunn at the Colac meeting.

Among his other winners was Inastride who gave Emsley a Lodge a winning double on the day.