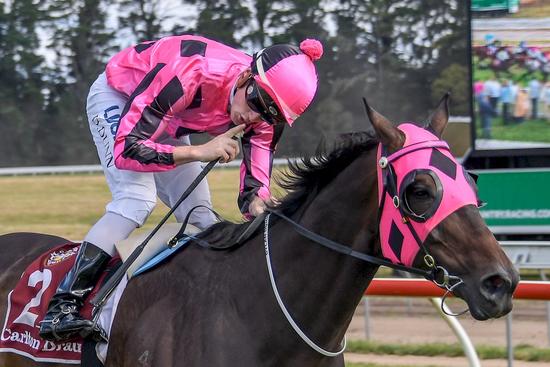 Jockey Dylan Dunn implemented “Plan F” and got an A-class result when Inastride ridden against his normal racing pattern stormed home from the back of the field to score at Colac on Saturday.

A customary front-runner, the seven-year-old was caught on the back foot at the start and raced wide worse than midfield as jockey Dylan Dunn was forced to make the best of a bad situation in the Richie and Ringo 0-58 Hcp (2000m)

“The plan was to jump out and go forward as that is the way to ride him but that went out the window when a horse played up beside him in the gates and was scratched delaying the start.” trainer Jamie Edwards said.

“Inastride was standing in there quite a while and when they came out of the barriers, he was completely flat-footed and had no speed at all,” Jamie said.

With on-pace tactics out of play, Dylan who had already ridden four winners at the meeting and would land six for the day, rode wide and confidently on Inastride.

Jamie said that while he was unable to race handy, the 23-year-old took on board his instructions to let Inastride roll at a steady tempo and get going a long way out.

“I told him ‘don’t ride him too pretty’ but with him being back so far in the run it was pretty much Plan F,” Jamie said.

Inastride improved four-wide from the 700 metres and was a close fifth five-wide on the turn steadily making ground as those ahead of him in the solidly run race dropped off one by one.

Red Sensation and Asquillion were the last of the on-pacers standing and Inastride had them quickly had them covered as he charged down outside of the track hitting the front at 150m and scoring with authority by 1-1/2 lengths Champagne Nights and Jimmie Jim.

Guy and Tony retained a majority holding in the gelding while a number of other Emsley Lodge clients also bought into him.

Inastride’s Colac victory as his third for the stable with his other wins being at Swan Hill and Tatura in the spring last year.