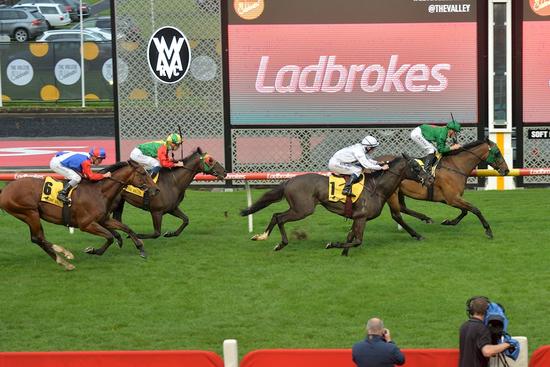 Macrobius and Prince Ziggy provided a milestone at Moonee Valley for Emsley Lodge when they gave the stable its first city double on Friday night.

Both horses were last start winners at Wodonga and the Moonee Valley assault was planned a month ago.

“The horses have been set for these races for the last month and for it to come off is pretty special.

“We’ve had a winner a second in town a few times, but this is the first double.”

Macrobius, whose eighth win took his career earnings to $200,618, has been reinvented as a miler and Prince Ziggy is in career best form with his prizemoney rising to $107,677.

Apprentice Lachlan King ride Macrobius while Chelsea MacFarlane had her first ride for the stable on “Ziggy”.

Jamie said he was especially excited for Macrobius’ owner Mike Palmer, whose best horse was Sertorius.

“Mike has been a client of ours for a long time and Macrobius is the first horse he bred so I know it is very special to him for this horse to win in the city,” Jamie said.

“Mike couldn’t make it here tonight because of the floods but he will be watching at home, so good on you Mike.”

Macrobius is a seven-year-old son of Dylan Thomas and the first foal from Moorunda Lass who was a Kyneton winner and Moonee Valley placegetter for Mike Palmer.

Like a replay of his last start victory at Wodonga, Macrobius led and was headed on the home turn but underlined his courage fighting back strongly to nail his second victory in a row.

Lachlan King said Macrobius found a “beautiful rhythm” in the lead but was forced to go for home earlier than expected when Bad Wolf went past him.

“Even though I got headed I was still pretty confident I had plenty of horse underneath me,” Lachlan said.

“Once he saw the other horse popping through his blinkers, I felt him go to the next level.”

Strong to line, Macrobius scored by a half-length from Bad Wolf with Dangle Lad another 1-3/4 lengths away third.