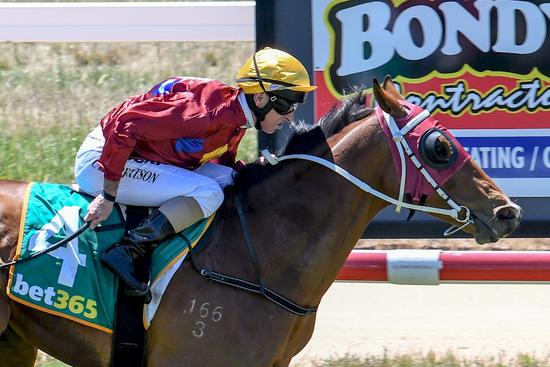 Five-year-old Crafty Lion added to a winning run for owner Brian O’Dwyer with an emphatic victory second up over 2000 metres in the Melbourne Parkview Maiden at Ararat on Tuesday.

In recent weeks Brian has also celebrated the success with Honeywine at Benalla on October 29 and is a partner in Mannza who scored at Pakenham on November 15.

Brian bought Crafty Lion and Honeywine as tried horses and with better luck, Mutanaaseq, who he bought as an unraced three-year-old from Lindsay Park, would have joined his stablemates in the winner’s circle over the spring.

“Brian has been with the stable for about 12 months it is great to see him getting winners,” trainer Jamie Edwards said.

Formerly trained by Mike Moroney Crafty Lion has a dour pedigree being by Mastercraftsman from The Mighty Lions who Moroney trained for to win the Avondale Cup, place second in the Hobart Cup and fourths in the in the Auckland Cup, VRC St Leger, SA Oaks and Gold Coast Prime Minister’s Cup.

Jamie said Crafty Lion was at the end of his campaign when he arrived at Emsley Lodge in the autumn but had trained on impressively after a break.

At Ararat, Crafty Lion was backed from $11 to $5.50 on Sportsbet, and Craig Robertson rode him aggressively to take advantage of the inside barrier, landing him in the box seat behind the leader.

Crafty Lion burst to the lead in the straight and scored by 2-1/2 lengths from Coherence with True Bell another 2-1/4 lengths away third.

“On the corner, you could feel him starting to wind up, and once I smacked behind the saddle, he lengthened a bit more and was so strong through the line he could have gone another lap,” Robertson said.

Jamie said 2400 metres would be perfect for Crafty Lion third up next start.