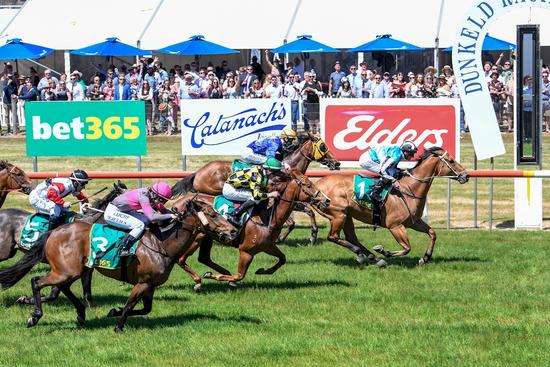 Well-travelled gelding Moot recaptured his best form when he scored his first Victorian win in more than three years at Dunkeld on Saturday.

The seven-year-old who began his career at Emsley Lodge, returned home earlier this year after a very successful stint in the Northern Territory.

Ridden by Craig Robertson, Moot enjoyed a perfect run just off the pace before finishing strongly late to land the in the Darriwill Farm BM70 Hcp (1200m).

In a busy finish, the son of Duke of Marmalade scored by nearly a length from Royal Spinner and pacemaker Saysyuri.

Managing-owner Aaron Kingshott said it was pleasing to see Moot get back to his best after a recurring hoof injury win halted his career in the Northern Territory, where he won nine races at Alice Springs (4), Darwin (4) and Tennant Creek (1).

Moot’s only other win was at Geelong for Emsley Lodge in June 2015 before he was sold to Aaron and Debbie Kingshott under the #Raceturquoiseblack&white banner.

Aaron said trainer Jamie Edwards, who had recommended Moot as an ideal Darwin horse, welcomed Moot back to the stable for rehabilitation.

He said Moot was a gross horse which added to the challenge of curing his injured hoof but he’d recovered well at Emsley Lodge.

“The horse really put the writing on the wall that he was getting back to his best when he ran so well on Geelong Cup Day,” Aaron said.

Jamie said Moot had worked brilliantly leading up to Dunkeld and he was confident of a big run from him.

“Horses that work at home like he did are always very hard to beat,” Jamie said.

Kingshott’s have had a long association with Emsley Lodge, but Moot is the first horse they have had with the stable since Golden Portrait won three races seven years ago.