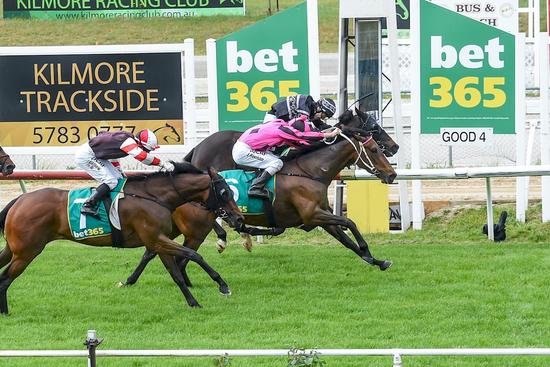 Four-year-old Tavitaka had jockey Jake Noonan working overtime before manufacturing an unlikely last stride win at only her second race start at Kilmore on Friday.

The Tavistock mare was battling under hard riding on the home turn and looked beaten as she raced greenly in the home straight but rallied after Noonan switched the whip to his left hand near the 150 metres.

Still, in fourth place and three lengths off the lead at the 100 metres, Tavitaka charged home to snatch victory on the line from pacemaker Nero Veloce in the bet365 Maiden Plate (1900m).

“She was only doing her best work through the line but was still doing a bit wrong,” Noonan said of the inexperienced mare.

Trainer Jamie Edwards said it wasn’t pretty to watch but he is looking forward to the future with Tavitaka who his wife Janet bought over the internet earlier this year as a tried but unraced filly.

“It was only her second start and there is so much upside to her,” Jamie said.

“She didn’t know how to win and when she came off the bridle she was ducking and weaving.”

The whip change was a key factor as it straightened up Tavitaka.

“What I really liked about her was the way she put her head out and had a crack,” Jamie said.

“She is only going to get better and it’s going to be interesting once she gets out over 2400 metres.”