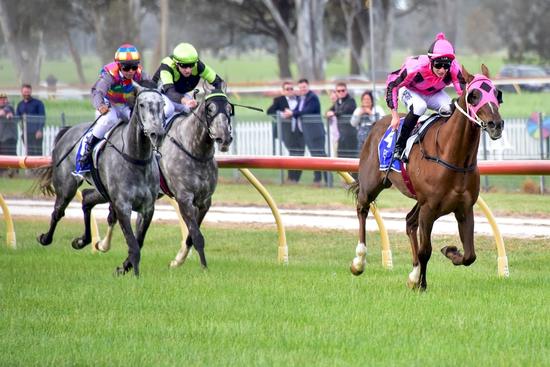 The special win makes it two in a row for the five-year-old after last month scoring at Wangaratta.

Apprentice Zac Spain had his first ride for Emsley Lodge on Prince Ziggy and made the most of his opportunity with the gelding scoring a soft three-length win in the Ladbrokes Bet Better BM58 Hcp (1860m).

The victory was all more meritorious as Prince Ziggy raced wide for nearly half of the race before pressing forward outside the leader approaching the 1000 metres.

The son of Monaco Consul took the lead rounding the home turn at the 300 metres and after straightening up 1.5 lengths in front burst away passing 100 metres without Spain pushing him out over the closing stages.

Trainer Jamie Edwards said it was pleasing to see Prince Ziggy racing so well and winning for a great group of owners.

“They have been with him since we bought him as a yearling and they love him,” Jamie said.

Another part-owner Brian McKiterick was just as thrilled” What great little trier. A little racehorse with a huge heart. Makes me proud to be one of his owners.”

Prince Ziggy posted his first career win in August last year and had finished second three times before his half-length win at Wangaratta over 2000 metres on September 17 and Saturday’s impressive victory.

Assistant trainer James Edwards saddled up Prince Ziggy at Avoca whilst Jamie was at Bendigo where the stable also landed the first leg of a Caulfield Cup Day double with Lorenzetti.

The stable has now recorded eight wins in the first 11 weeks of the season.