Focused "Ziggy" gets the money 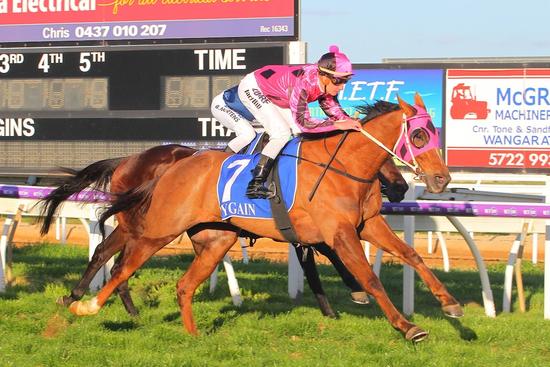 An aggressive ride from Jack Hill proved a winning tactic on Prince Ziggy who scored at Wangaratta on Monday.

Hill, who only resumed riding nine days ago after a fall at Wodonga in May, took advice on race morning from regular jockey Craig Robertson who forfeited the mount on the five-year-old because of illness.

“Robbo rang me this morning and gave me a little bit of advice how to ride him and it paid off,” Jack said.

Hill urged Prince Ziggy from the gates and after being caught three-wide without cover early pressed on to settle second behind the free-going Franquin.

Hill said he was determined to keep Prince Ziggy focused close to the lead as he’d had a tendency settle back and go to sleep in his races.

“He travelled up really good and getting to the corner I thought ‘don’t go’ because might be vulnerable late, but when I gave him a squeeze he picked up and found a bit more.”

Prince Ziggy hit the front on the home turn and kept finding under pressure to hold off Raiding Party by a half-length in the Ovens Ford Melb Cup Day BM58 Hcp (2000m).

“We have given him bit of a stir up at home with short, sharp work it has worked.”

Jack Hill has had a long association with Emsley Lodge and ridden many winners for Jamie who was thrilled that Prince Ziggy was able to get the popular 27-year-old jockey back in the winner’s enclosure.

“Bloody good on him,” Jamie said. “That’s his first winner back and I’m very happy it was for us.”