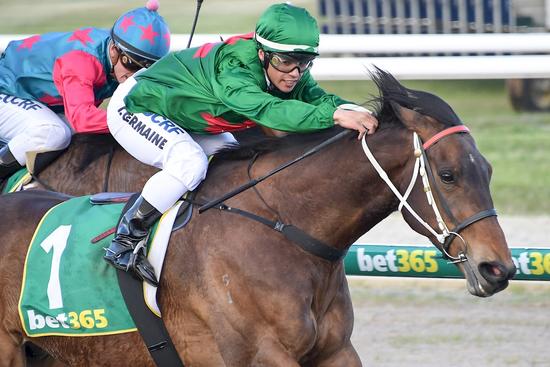 Synthetic track specialist Macrobius bounced back from a virus and a last-start injury to score his first win in more than a year at Geelong on Friday.

Stable apprentice Trent Germaine rated the seven-year-old beautifully on the speed with Easy Drama and after taking the lead into the home straight scored by nearly a length in the Andrew Eccles Good Luck! BM64 Hcp (1900m).

The victory was the second leg of winning double at Geelong for Emsley Lodge after speedy mare Fill The Flute romped home in the previous race.

Macrobius’ last win was the Synthetic Stayers Final (2200m) at Pakenham in July last year and he was on target again for this year’s feature when he was struck down with a cold the week of the race.

His misfortune extended to his last start when he pulled up lame in his near hind leg after finishing down the track at Sandown.

Friday’s victory was Macrobius’ sixth in 41 starts and notably his fifth in 19 runs on the synthetic on which he has missed place only five times.

“He just loves the synthetic,” said trainer Jamie Edwards. “He is a dead-set six lengths better on it than grass.”

A bold on pace stayer, Macrobius was down in grade on Friday after racing in 70 and 78 class races for the last year and he was handily weighted with 59kg after the allowance for Trent Germaine who was grateful to owner Mike Palmer for giving him the ride on the gelding.

“I can’t thank him enough for the opportunity,” Trent said.

He said he was confident a long way from home Macrobius would win after stalking Easy Drama for most of the way.

“At the 600m I had a lot of horse underneath me and I knew he was going to take some beating,” Trent said.