Moshvago bounces back on synthetic 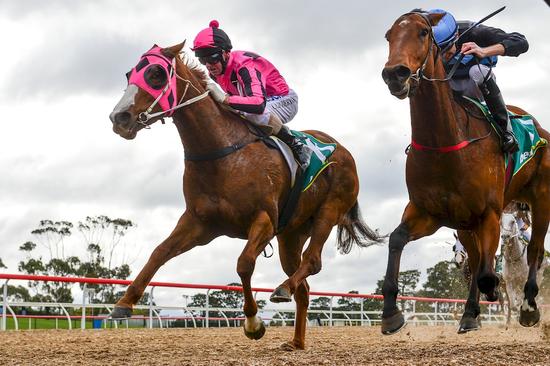 Four-year-old mare Moshvago bounced back with a stunning form reversal to shrug her maiden tag at Geelong on Tuesday.

The chestnut daughter of Moshe was far more comfortable on the synthetic track after she ran well below expectations finishing second last on very heavy ground at Geelong 11 days ago.

Trainer Jamie Edwards said firmer tracks were essential for Moshvago and that the all-weather track was her best short-term option after recent rain.

“It looked like there would be wet tracks for the next couple of weeks, so we decided to bring here and got a good result.”

Moshvago only had four rivals in the Bet365 Maiden Plate (1300m) but she made it challenging for jockey Craig Robertson.

After being a length slow to begin she took 50 metres to get into full stride before improving on the inside behind the leader with the run of race two lengths off the pace.

“She took a little time to get into stride and sort of got on the bridle then didn’t want to be there on inside,” Robertson said.

“I had to make her be there and then in the straight, she wanted to lay in.”

Despite her idiosyncrasies and losing a plate in running, Moshvago responded well when it counted, racing into second place on the turn and chasing gamely despite the leader looking home 2.5 lengths clear in the straight.

The best part of her race was the final 100m when she stormed home to score a last stride victory over Messika with third-placed Fille Gris 4.5 lengths away third.

“She has been a horse that has shown us a bit, and to the owners’ credit they have stuck fat with her,” Jamie said.

“I’m really pleased for them as she has had a niggling foot problem that took a bit of time to sort out,” Jamie said.

Earlier this year Moshvago, who has had nine starts, twice finished second at Benalla.

“She is a four-year-old winning mare now which makes her worth a bit more as a broodmare and I’d say she got more wins to come,” Jamie said.