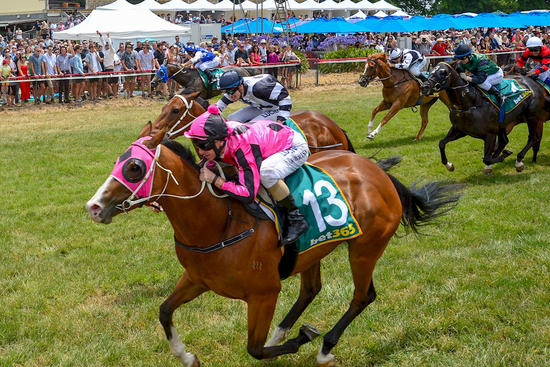 Champagne flowed after the appropriately named Fill The Flute led all the way for an impressive debut win at Camperdown on Saturday.

Bought for just $7000 as a stable companion for another weanling 2-1/2 years ago, the daughter of Statue of Liberty impressed the first time she ever galloped and a decision to retain her is paying off nicely.

A recent barrier trial at Terang tuned her up for Camperdown and she started at $7 after as much as $26 was offered when markets opened for the Rabbie Burns Maiden Plate (1000m).

After beginning fairly, Fill The Flute booted up to take advantage of her inside barrier and the three-year-old held a narrow lead to the turn before jockey Craig Robertson let her go early in the home straight.

With a good turn of foot, she put two lengths on the field near the 200m and was three lengths clear at the 150m before Robertson struck her with the whip and she started swishing her tail.

As the minor placegetters closed, the filly’s supporters held their breath with Fill The Flute holding on to score by nearly a length ahead of Low Level Flying and One Dance.

“We set her for a debut win so it was great to get the result,” said trainer Jamie Edwards whose wife Janet part-owns the horse with Emsley Lodge co-founder Peter Sandars, his wife Christine, Spirit Of 1852, Wiltona Winners, and Hahn Racing.

A flashy filly with a blaze and three white socks, Fill the Flute grew up at Emsley Lodge sharing a paddock with talented home-bred filly Minyinga who is also a winner.

“We thought we might have sold Fill the Flute down the track but she’s always been a really fast horse so we kept her,” Jamie said.

“She ran a quick time in her first ever gallop and it will be interesting to see what level she can get to.”

Fill The Flute’s is the first foal to race from Redoute’s Choice mare Dom Perion who was a $200,000 Magic Millions yearling and won four races from 1300m to 1500m including a city race at Caulfield.