Inastride wins in near track-record time 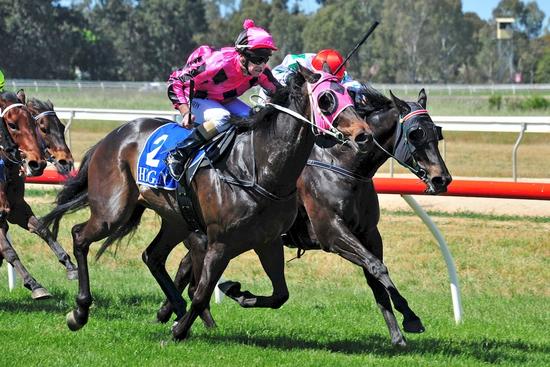 Former New Zealand stayer Inastride made it two wins in a row after toughing out a hectic 1980-metre BM58 in near record time at Tatura.

The first 900 metres was run a breakneck speed with the lead changing three times before the half-way point of the Greater Shepparton City Council Hcp.

Jockey Craig Robertson had his work cut out as runners buzzed around him while trying to keep Inastride in a rhythm and in a forward position.

Wicked Sensation flew forward early but ran wide on the first turn and lost the lead to Moss Magic before again regaining the front at the 1400 metres only to lose it again to Margot’s Boy 200 metres later.

He said Inastride, shouldering 60kg, was able to get a breather when he settled just off the pace behind Margot’s Boy before asking him for an effort at the 600m.

Into the straight Inastride was threatening only a length behind in third place before settling down to a two-horse war the final 100 metres.

In a stirring finish, he scored in a photo finish from Quarry Rock, with Wicked Sensation 1-1/2 lengths away third. The winning time of 2m2.89s was just a half second outside the course record.

“He’s an on-pace stayer and it has only been the last two runs that we have been able to ride him that way,” Jamie said.

“He’s not a superstar but he’s tough and he tries hard.”

Robertson won on Inastride at Swan Hill a month ago but was really impressed with his narrow win at Tatura.

“I thought he might have been just a 58 horse but I think with a couple of kilos less in 64 class and up to 2400m he will measure up,” Robertson said.