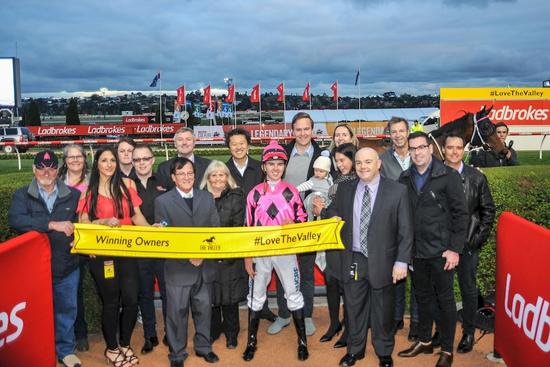 The impressive performance was a significant improvement on her last start at Geelong when fifth behind the place-getters King Way, Happy As Hell and Bling Dynasty who all finished well behind her at the Valley.

“We changed it up a bit with her and it has really worked,” Jamie said.

He said the facilities at his Freshwater Creek complex had played a big part in Kawabata’s performance as she was a mare who easily gets bored with training.

“We can pretty much do what we want with her, including working her left handed or right handed on our private track, or even take her to the beach if we want,” Jamie said.

He said last preparation Kawabata became really dour and failed to measure up to the Adelaide Cup but she might now deserve a crack at the Group 3 Geelong Cup (2400m) on October 25.

“The Geelong Cup fields haven’t been that big in recent years and she would be down in the weights with a hope of getting some black type with a third or fourth which would be great for her as a broodmare,” Jamie said.

A winner of seven of her 42 starts, six-year-old Kawabata is bred in the purple by Encosta de Lago from Riva San, winner of the Queensland Oaks and Derby.

Emsley Lodge’s last Geelong Cup runner was Sertorius who twice contested the feature in 2014 and 2015.