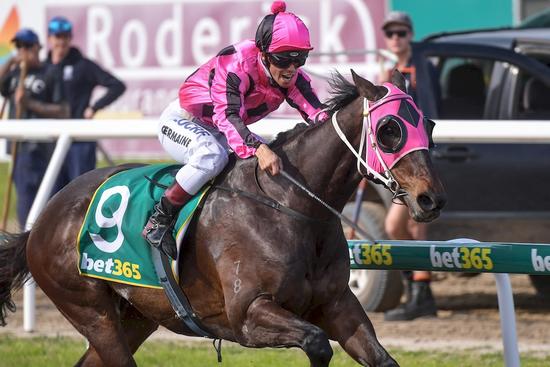 Veteran galloper Severn Road responded brilliantly to a set of blinkers when he went within a second of the course record leading all the way on the Geelong synthetic on Friday.

Hard and fit from recent runs over longer distances, the nine-year-old was ridden a dashing race by stable apprentice Trent Germaine to land the Go Cats BM64 Hcp (1900m).

Trainer Jamie Edwards said the addition of blinkers had worked in the past with Severn Road and that he was suited back on the synthetic.

“He loves the synthetic and back to 1900m I told Trent not to muck around and give them plenty to chase.

“Fitness was never going to be an issue after leading over 2400m last start and he dropped 4kg going from a BM58 to BM64.”

Despite drawing wide, Trent pushed hard from the gates and crossed the field on Severn Road at the first turn before sailing nearly three lengths clear in the middle stages.

Still full of running entering home straight, he charged to a four-length lead at the 200 metres and was never in doubt scoring by 1-3/4 lengths from Lynch Mob with another 2-1/2 lengths back to Ascot Red.

Trent has ridden Severn Road at his last seven starts for a win a second and two fourths.

“I’m really rapt for Trent because he works very hard but is not getting many opportunities,” Jamie said.

“Hopefully this win can kick him along a bit.”

Jamie said that with the synthetic racing season coming to a close Severn Road would target the summer racing, and flagged a possible tilt at the Wycheproof Cup.

“He’s the right sort of horse for it,” Jamie said.