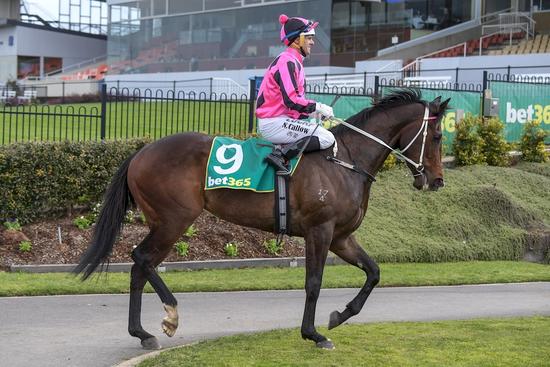 Exciting home-bred Minyinga confirmed the promise she had shown on the training track when she overcame a tough run to impressively land her maiden at Geelong.

Having only her fourth race start, the filly was coming off a weakening last at Sandown on August 23 but appreciated the drop in class in the Bet365 3YO Maiden Plate (1300m) on Friday.

Minyinga did it the hard way, posted four-wide without cover for much of the race, and steadily improved from second last at the 1000m to be in a winning position just off the pace in fourth place on the home turn.

Despite covering a heap of ground, she challenged strongly in the home straight, bursting a length clear inside the final 100 metres and holding off a late change to beat Circomo in a photo finish.

The victory was a stunning result for stable followers with Minyinga starting at $41, but it was also a sentimental one for Emsley Lodge, the breeders of the filly.

Another co-founder Peter Sandars, along with Janet Edwards, CMC Racing and Hahn Racing race the filly.

Notably, Minyinga’s sire, the English stakes winner Elzaam stood only one season in Australia at Woodside Park and from that crop Minyinga is the second winner from only 12 named foals to date.

Last month, trainer Jamie Edwards thought so much of Minyinga that he nominated her for the Group 1 Thousand Guineas.

“I really like her and what she showed us as a two-year-old on the track suggested that she was pretty smart,” Jamie said.

He said “a million things went wrong” at her Echuca debut when she was beaten less than four lengths and that the stable was keen on her when she finished a close fourth at Geelong at her second run.

“At Sandown, it looked like she didn’t run the 1500m so we brought her back to 1300m, sat off the speed and she hit the line very well,” Jamie said.

Callow was full, of praise for Minyinga who he declared was city class after the Geelong win.

“She toughed it out and she can be competitive in town,” Callow said.