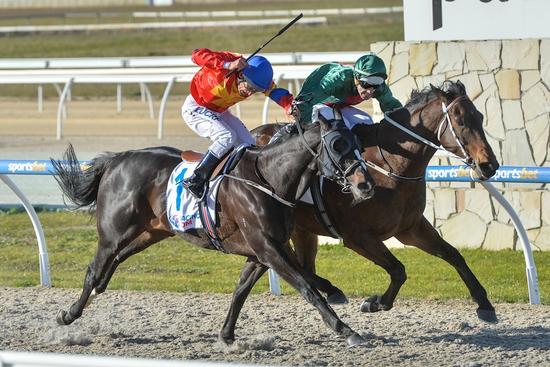 Macrobius delivered on a three-month plan when he pulled out a career best performance to land a stirring all the way victory in Sunday’s Racing.com Winter Challenge Synthetic Stayers Series Final (2200m) at Pakenham.

Ridden by Noel Callow, the Dylan Thomas gelding refused to be beaten as he and Damien Oliver’s mount Archery Peak went stride for stride in a desperate battle from the home turn.

“He left nothing the tank,” said trainer Jamie Edwards after the tenacious photo finish win.

“Three months ago we made this race his mission and he peaked on the day which was very rewarding.

“He’s a beauty on the synthetic tracks and it was great to get the result for his owner and breeder Mike Palmer.”

Mike Palmer also had stablemate Roldana in the race and she finished fifth.

Macrobius won four of his 11 starts for the season, including three of his last five, which featured a heat of the Stayers series at Pakenham July 14.

Callow said the win showed how much Macrobius had improved since he won BM64 race at Geelong on June 2.

“He has gone up a level,” Callow said.

“He was there to be run down today and Damien (Oliver) had him at the furlong when his horse levelled up, but my bloke was just too strong.”

Last year Macrobius was a length second to Zenithal in the Stayers Final after placing sixth in the 2015 final.