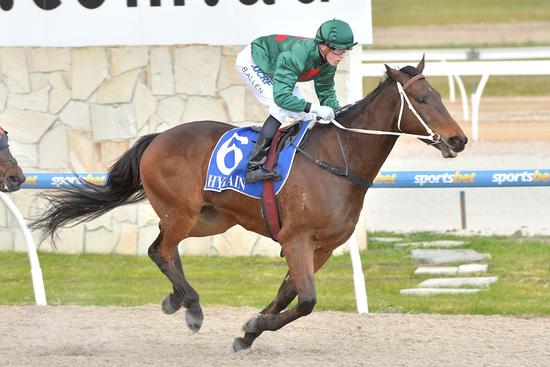 IN-FORM stayer Macrobius is shaping as the horse to beat in the $50,000 Winter Challenge Synthetic Stayers Final later this month after reaching a career milestone with an impressive victory at Pakenham on Friday.

The five-year-old boosted his career earnings above $100,000 when he outstayed Sammy The Snake and Dreaded in the fourth heat of the series over 2200 metres.

Bred by his owner Mike Palmer, Macrobius is in career best form with two wins and two placings from his last four starts and has now won $104,743 in prizemoney.

His latest victory followed a half-head second to Blood And Sand in heat two of Synthetic Stayers series at Geelong on July 4. Macrobius beat the third horse home by seven lengths on that day.

“It is full steam ahead to the final now,” said trainer Jamie Edwards following Friday’s success.

The Winter Challenge Synthetic Stayers Final is at Pakenham on July 30 and it will be the third time he has contested feature. He finished sixth in 2015 and was beaten length when second to Zenithal last year.

“This campaign he has been set for the stayers’ series and it is fair to say he is in better form than a year ago,” Jamie said.

“He loves the synthetic tracks and with his on-pace racing style he gives himself every chance.”

On Friday apprentice Ben Allen had an easy ride as Macrobius strolled to the front and dictated the pace until the 1200 metres when Dreaded whipped around the field from last to head him.

“It put a bit more speed in to the race but I was able to sit a length off (Dreaded) and get a comfortable run.” Allen said.

Macrobius regained a narrow lead on the home turn before breaking clear near the 200 metres and going on to win easing up on the line by 1-1/2 lengths.

He has now won four of his 30 starts, three of those wins being in this season. He has also placed another 11 times in his career.