Kawabata steps up with city win 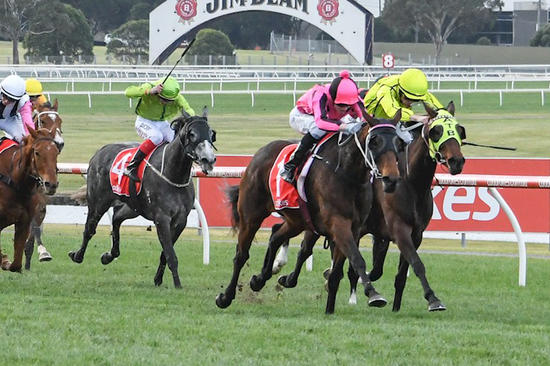 A DECISION to deviate from conventional race programming has paid off with stayer Kawabata posting her first city success at Sandown on Wednesday.

Second up over 2100m, the five-year-old mare stormed home with a full head of steam to land the Clanbrooke Racing BM64 Hcp and significantly increase her value as broodmare prospect.

“It is important for her that she has won in the city,” trainer Jamie Edwards said.

“She is by Encosta de Lago out of an Oaks and Derby winner (Riva San), and is a very valuable mare now.”

This campaign Jamie has poured the work into Kawabata to get her to her optimum race distances as quickly possible and three weeks ago she resumed with a fast finishing third over 1600 metres at Sandown.

“We have changed her training around a little bit and deliberately tried to get out over ground as quickly we could,” Jamie said.

He said that Kawabata was at her best at 2400m but hasn’t given up making her a 3200m horse despite finishing unplaced in the Adelaide Cup in March.

“Her racing pattern suggests she will run 3200m,” Jamie said.

Ridden today by apprentice Ben Allen, Kawabata settled back in the field about 12 lengths off the lead and made her run from third last at the 600 metres.

In the home-straight she made up about five lengths with a brilliant sectional from the 400m to 200m, and Allen put the whip away as she swept to the lead passing the 100m, going on to score by 1-3/4 lengths from High Lago, with Blackmaker another 3-1/2 lengths away third.

“It’s onwards and upwards now,” Jamie said. “She looks like she is going to be in for a pretty good prep.”