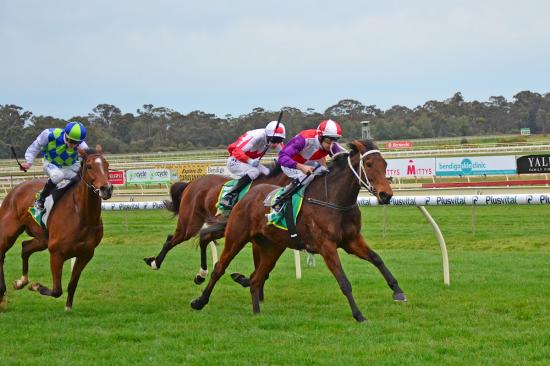 Consistent mare Bryanna rewarded the patience of her owners when she took her career earnings to nearly $60,000 with an overdue maiden win at Bendigo on Friday.

Trainer Jamie Edwards made a late call to run the five-year-old in the Silks Function Centre Maiden Plate (2400m), and having her 19th race-start, the $6 chance got home with a length to spare over the odds-on favourite Ah Well ($1.70) and the fancied Jovian ($3.60).

Jockey Dwayne Dunn was mindful of riding Bryanna as close to the speed as possible and he was able to land her outside the leader Ah Well.

On the home turn, Dunn made his move and while Ah Well was in for the home straight fight, he could match Bryanna in the last 100 metres.

“She travelled really well into the bend and put the pressure on the favourite and while he seemed to fold she kept chugging along,” Dunn said.

“She has been a beauty just punching around and placing in these maidens with the bonuses,” Jamie said.

“In her last two runs alone she picked up more than $11,000 for just finishing second and third.”

Apart from earning $12,650 for first prize at Bendigo, she also collected another $8,400 in bonuses.

“She is so consistent and she just outstayed them,” Jamie said. “She has been deserving for a while so it was good to see her finally get a win.”

Bryanna’s victory follows eight minor placings in her career and she will now head to a 58-class event where she will get her chance again to impress with less weight.