Georgie in tune with Marcello's Sonata 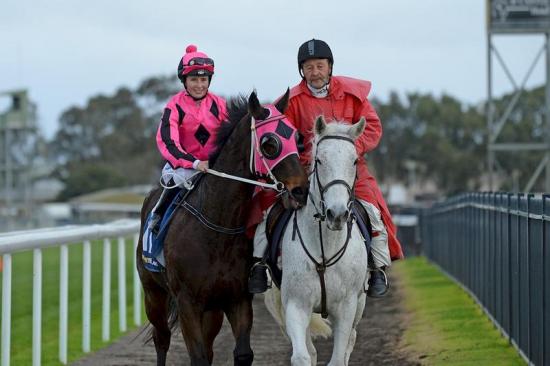 A highly strung gelding brought out of retirement to develop the career of stable apprentice Georgie Cartwright posted his first win in more than two years at Geelong on Tuesday.

Under instructions from trainer Jamie Edwards to “lead at all costs” on the synthetic track, Georgie was never headed on eight-year-old Marcello’s Sonata in the Charles Rose Jewellers BM64 Hcp (1300m).

“I am really happy to get another winner for Jamie, especially as he brought this horse back for me to learn to race ride on,” said 23-year-old Georgie.

“I’ve had a fair few rides on him and got close a couple of times but today was the day - he was never going to lose.”

Georgie has ridden 12 winners since her first race ride just before Christmas last year, and is gaining a reputation for winning on long shots.

At Geelong Marcello’s Sonata started at $31 and paid $49 on the tote, knocking quaddie punters for a six.

Georgie also won on $41 chance Rose of Texas in December and Kartem Around Boy ($71) in March.

A bowed tendon delayed the racing career of Marcello’s Sonata who didn’t race until a late five-year-old.

He won two of his first 11 starts, both of them when first-up on the Geelong synthetic before retirement beckoned.

Marcello’s Sonata is raced by Jamie’s wife, Janet, and Georgie has ridden the son of Galileo at six of his seven starts this year.

He wasn’t beaten far in most of those runs but after failing at Colac he had a seven-week freshen up before winning his first race in 743 days at Geelong, his previous success being on May 27, 2014.

Georgie said: “I knew coming to the turn if he was still under a hold that he would give a good kick at the end. It was a really strong win.”

Marcello’s Sonata scored by 2-1/2 lengths from River’s Gift with another two lengths back to Grey Sambucca.