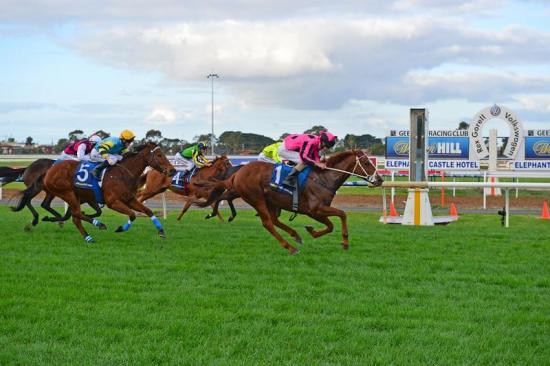 Nervy gelding Cool Cool World prevailed against the odds with a stunning burst from back in the field to post his second win in a row at Geelong.

Trainer Jamie Edwards said the win was full of merit given the circumstances.

“I really believe weight affects horses on wet tracks and with 60.5kg from a wide barrier he has done a great job to win, especially as the winners had been racing close to the pace and near the rail all day,” Jamie said.

Cool Cool World jumped from barrier eight in the 10-horse field on the Soft 7 track and jockey Jamie Mott had hoped to have him much closer to the lead to help his chances.

“He began okay but he didn’t really muster like I thought he would,” Mott said.

The $4.60 third favourite was still five lengths off the lead at the 150 metres and surprised Mott with his strong finish in the middle of the track to score a length win over Shortspresso and Belaruski.

It is usual for Cool Cool World to work himself up into a lather of sweat on race day but an experiment to bring him to the track before the first race, several hours prior to his event, seemed to help him.

“It was easily the best I have seen him at the races,” Jamie said.

“He was calm as he walked around the enclosure so the penny might be starting to drop with him.”

The five-year-old has now won three of his 11 starts for his owners Wayne and Julie Jennings who bred the Spinning World gelding, and there is a good chance that he will improve on that strike rate when he gets on the synthetic track at Geelong in the coming weeks.

“He is one of the fastest horses in the stable and he works like a star on the synthetic,” Jamie said.

He said a 1300-metre sprint at Geelong in a couple of weeks was likely to be his next mission.