Adelaide win for "The Fog" 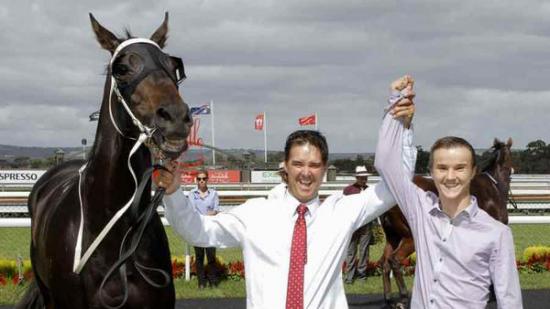 Ultra-consistent galloper London Fog posted his third win this campaign and his fourth for the season with a successful hit and run raid in Adelaide last Saturday.

Punters rallied behind the four-year-old backing him into $2.60 favourite and he delivered with an easy victory in the Schweppes BM75 Hcp (1950m).

Ridden by Joe Bowditch, “The Fog” got a beautiful trail in the one-one position and after looming up three-wide into the straight, took the lead near the 250m and scored by two lengths from Hasta La Thomas and Choux Diva.

“It was a good result all around,” said trainer Jamie Edwards.

“The race was a little out of left field but as it turned out the field for the BM75 class race was well below that standard he was pretty well placed in it.”

London Fog has now won four of his nine starts this season and, with six seconds and three thirds in his 20-start career, has now accumulated more than $132,000 in prizemoney.

“He has a great group of owners and he is giving them a lot of fun,” Jamie said.

“He is going through his grades really well and has definitely improved this campaign.

“He has a great temperament and is just so consistent and that’s largely because he puts himself in the race, goes forward and he stays out of trouble.”

One of London Fog’s few unplaced runs was at his previous start when he was trapped wide the whole way in the Victoria Middle Distance Final (2040m) at Moonee Valley.

Earlier this campaign he won a BM64 heat of Victoria Middle Distance series (2040m) at Moonee Valley on March 14 and another BM64 race over 1856m at Terang third-up on February 4.

His maiden win was over 2200 metres at Pakenham in August last year.