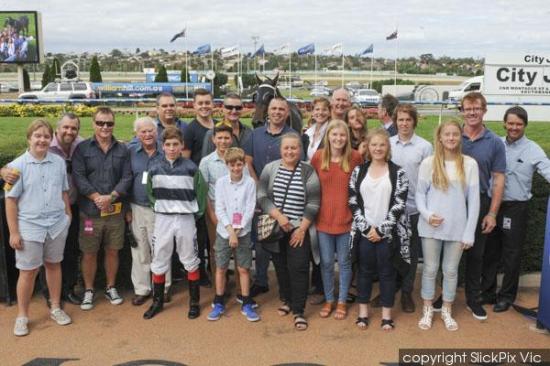 Ultra consistent four-year-old London Fog flagged himself as serious contender for the Tour of Victoria Middle Distance Final (2040m) later this month with a courageous win at Moonee Valley on Monday.

A strong band of owners were on course to see the half length victory in the City Jeep Grand Cherokee BM64 Hcp (2040m), which was “The Fog’s” third win in 18 starts.

“This is great fun” said part-owner Tim McGrath who was celebrating his city winner and had been enthusiastic about London Fog’s chances with prominent social media posts.

It was at his 40th birthday a few of years ago that he and a few mates agreed to join the ownership of the Ben Casanelia-bred gelding who was the result of a $1000 service to Econsul.

Trainer Jamie Edwards said London Fog’s optimum distance was around 2000 metres and was impressed with the way he kept fighting to the line after hitting the front at the 500 metres.

Typically, this campaign London Fog had been swooping home from well back in his races but apprentice Brandon Stockdale used his initiative to settle just off the pace in third place and made his winning run from the 800 metres.

He peeled out three wide near the 600 metres and established a length lead turning for home.

“I didn't give him a lot of instructions. I just said ride the horse how you find him out of the barriers and with no speed today I thought it was a pretty smart ride.

“I loved the way the horse pinned his ears back from the 600 metres and kept finding all the way up the straight.

“He runs a really tough 2000m, and is definitely a much better horse this campaign.

“He has matured up a fair bit.”

Jamie was confident London Fog could win after a narrow defeat when a fast finishing second in the fourth heat of the Middle Distance series over 1962 metres at Yarra Valley on February 27.

“I thought there was no horse in the race better than him,” Jamie said.

“The only concern was how he was going to get around the Valley with his ungainly galloping action.”

With a very docile temperament, London Fog is a stable favourite.

His three wins have come from his last seven starts, two of them this campaign.