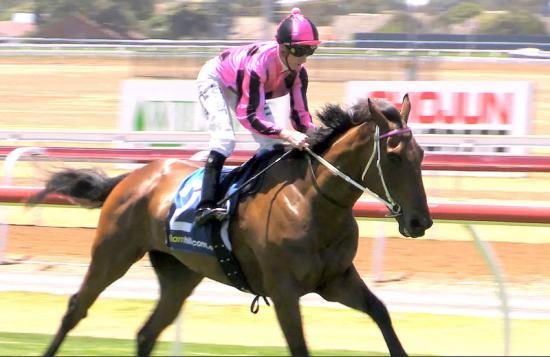 The stunning form reversal of Pardon the Spun has highlighted Emsley Lodge’s flexibility as a training complex.

Pardon the Spun won his maiden at Donald on Friday, much to the chagrin of punters who dismissed the four-year-old who paid $20.40 on Super TAB after finishing last and beaten a combined 37 lengths at his two summer runs this campaign.

Trainer Jamie Edwards admitted the form line made it hard to be confident about Pardon the Spun’s chances but he was expecting an improved run.

“He lost weight after he picked up a bug following his last run so we treated that, but the big thing has been changing his environment,” Jamie said.

“He now spends all his time in a small yard, over the fence from Sertorius, who keeps him in check.

“We tried him in a box, then in a paddock with another horse which didn’t suit him either, but being in a yard all day has turned him around.

“It goes to show how lucky we are with our facilities as it would be very difficult to train a horse like him in a normal stable environment.

“He is more settled, has put on weight, his final gallop was the best he had worked for a couple of months and he backed that up at Donald.”

Pardon the Spun drew near the outside in the 10-horse Harvey Norman Ararat Maiden Plate (1350m) and he could not have got a better ride from jockey Dean Yendall, who had to improvise early on.

“I was instructed ride him a bit quiet to get him to finish off but he was just pulling too hard and I was never going to be be able to get cover out there so I thought, bugger you, I will let you roll forward and settle outside the leader,” Yendall said.

The next challenge was to keep Pardon the Spun going, as he dropped the bit mid-race.

“I was gone a long way out,” Yendall said.

“I sort of gave him a smack, a tap on the shoulder and a kick in the belly to get him back on the bridle and he actually did that and was tough to the line.”

Up the home straight, Pardon the Spun battled on strongly, taking the lead in the closing stages and just holding out the fast finishing Rondalago to score by a head with The Soothsayer a neck away third.

Yendall said that despite winning, Pardon the Spun still had a bit to learn.

“He did a bit wrong. He is a big horse, a bit awkward, but he might take bit of confidence out of the win,” Yendall said.

Pardon The Spun has now raced four times since his midfield finish at his Geelong debut in July last year.