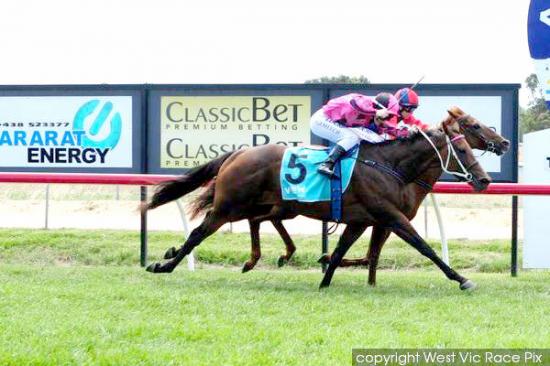 JAMIE Edwards was cheering but was unsure who he was cheering for most when Emsley Lodge hope Kawabata and Heebites, ridden by stable apprentice Georgie Cartwright, fought out the finish at Ararat on Monday.

Jockey Linda Meech had to use all her vigour on Kawabata ($3 fav) who spotted Heebites ($31) two-lengths start into the home straight before lunging on the line to beat Georgie in the Charlie Martin 0-58 Hcp (2000m).

“I wasn’t sure which one to cheer loudest for,” Jamie confessed.

“Georgie was on one and we had the other horse and really you wanted both to win.”

Georgie tried to lead all the way on Heebites and for most of the home straight he looked the winner before going down in a tight photo finish.

Jamie said Kawabata was vulnerable coming back in distance for the Ararat assignment but after looking at the field and weighing up the options took the chance that her class would come through.

“Last start she raced well over 2435 metres at Mornington when a close fifth on January 29 and it was a matter of whether we go three or four weeks between runs or go to Ararat before Bendigo next Tuesday,” Jamie said.

“It is always difficult coming back in distance but she needed to have a hard gallop before Bendigo and it worked out well.

“Drawing barrier one, she had absolute gun run the whole way, third on the fence and it was a nice bonus to win because it wasn’t a race we planned for her.

Kawabata has now won three of her 15 starts, with her other two wins at Kilmore in January last year.

She has always looked a very good staying prospect and last autumn she was on track for the Group Three SA Classic (2500m) until an injury the week of the race sidelined her.

At Ararat, the stable narrowly missed a winning double when Froffy was beaten in a photo finish in the Bakers Brew Ararat 0-58 Hcp (1100m).