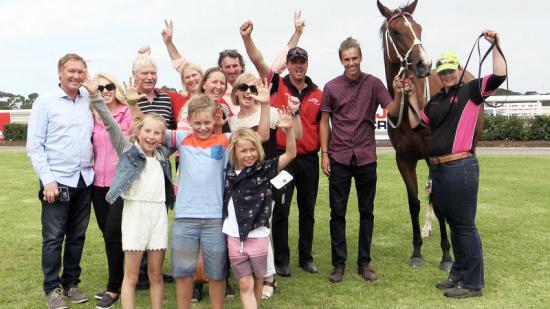 TALENTED mare GiGi Girl added to the Christmas festivities for her connections when she posted a dominant win at Geelong on Boxing Day.

The fast tempo played into the hands of the More Than Ready four-year-old who settled three lengths off the pace in second place before making her winning move approaching the home turn.

Ridden by Dale Smith, GiGi Girl was under a hold as she straightened up in front and she went to the line strongly to score by 1-1/2 lengths from Robbie’s Star and Strategic Demand in the Paul Kelly Creative BM64 Hcp (1535m).

Wayne and Julie Jennings, who race GiGi Girl with Greg Perry, were at Geelong to see GiGi Girl’s victory, which made amends for her last start second at Moonee Valley.

She has now won three of her last four starts after victories at Kilmore on November 9 and at Warrnambool on November 23.

At Geelong she was having her 10th race start and while she has finished top three on seven occasions she has been a difficult horse to ride with a tendency to over-race and get her head up.

“She continues to improve her manners with racing and the good tempo certainly helped her settle better at Geelong,” trainer Jamie Edwards said.

He said a return top city racing was now likely.

“It has been a good couple of months for her and she should only get better.”