Georgie to kick off off her career at Bendigo 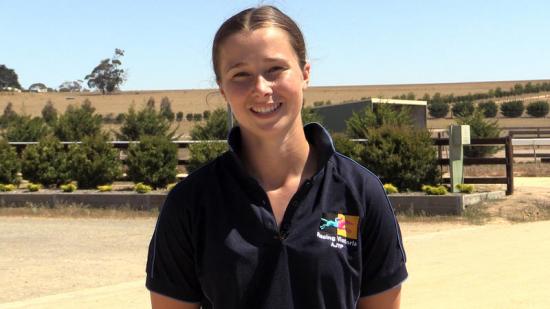 STABLE apprentice Georgie Cartwright has had her riding career delayed a day and will now have her first race ride at Bendigo on Sunday.

After months of hard work she will partner the Stephen Brown-trained Canali in the seventh race, the Bertocchi Christmas Hams BM70 Hcp (1100m).

Georgie was scheduled to realise her dream with three rides at Colac on Saturday, but Racing Victoria invoked its heat policy and abandoned race meetings statewide with temperatures predicted to soar into the 40s.

At Colac, Georgie was to have her first ride on the Jamie Edwards-trained three-year-old Essoare.

She was also booked to ride Alan Hunter-trained stablemates Gracenight and Rose Of Texas.

Georgie joined the Emsley Lodge stable in May last year and has been in Racing Victoria's Apprentice Jockey Training Program since January this year.

She has ridden in around 200 jump-outs and 44 official barrier trials, but can’t wait to put on the silks for race day.

"It has been a long wait," Georgie said.

"I will probably be a little bit nervous, but I will be more excited."

Canali is topweight with 64kg at Bendigo but will carry only 60kg after Georgie's four-kilo claim.

Georgie’s brother Josh was also an apprentice at Emsley Lodge.