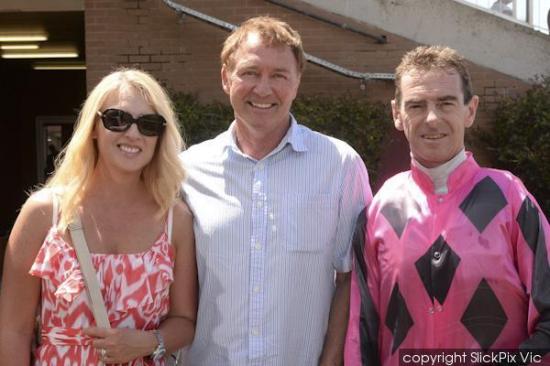 Jockey Craig Robertson declared there were more wins ahead for GiGi Girl after she charged home for a dominant victory at Kilmore on Monday.

The four-year-old mare did a lot wrong but was far too good for her rivals in the Steven Alderman F&M Maiden Plate (1462m).

Fancied at $2.90, GiGi Girl jumped awkwardly from the gates and after being slow to muster speed over-raced with her head up six lengths off the lead.

Robertson said GiGi Girl settled much better when the pace quickened down the hill and she showed a dazzling turn of foot three-wide and four lengths off the lead into the straight.

She quickly loomed up and reached the lead passing the 200 metres and raced away to beat $2.50 favourite Reciprocity by 3-1/4 lengths.

Robertson has ridden GiGi Girl at her three starts this campaign for a win and two thirds at Benalla and Stawell, and her finishing burst impressed him.

“She over-raced a little bit but when they started running down the hill she really ran into the race and let down really well,” Robertson said.

“She will definitely step out in trip, not a problem at all, and there are more wins in store for her for sure.”

Trainer Jamie Edwards said GiGi  Girl was a work in progress but had an exciting future, especially when she gets to 2000 metres.

“She is very smart but does a lot wrong in her races,” Jamie said.

"She gets her head up and over-races, but when the penny drops with her she is going to be quite brilliant.

“She probably should have won her last two starts but she is heading in the right direction.

“She has a fantastic turn of foot and that makes her exciting.”

The daughter of More Than Ready and three-time winner Countess Chloe was bred by Greg Perry and bought for $80,000 by Wayne Jennings who races the mare with his wife Julie and Perry’s Greenwich Stud.