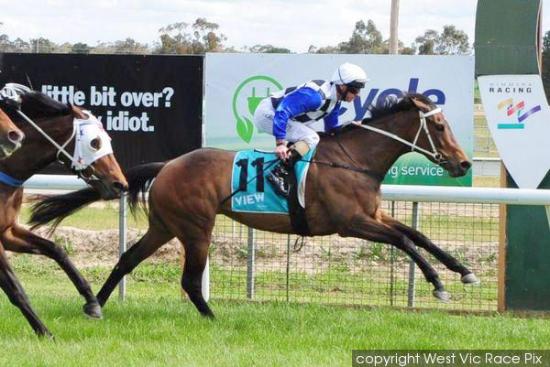 Moralto (3.20 fav) settled second last and was eight lengths off the lead mid-race before tracking nicely into the race three-wide from the 600 metres and positioned just behind the leaders on the home turn.

Jockey Craig Robertson got held up on her as she straightened up but when he switched her to the inside she speared through a gap one off the rail at the 200m and quickly established a two-length lead.

Challengers came thick and fast the last 100 metres but Moralto still had three-quarters of a length to spare on the line over Marocco Road and Nothin’like Albert.

“She just gets in a shocking spot every time and we jumped her to the mile to try and take out that early speed in the race,” Jamie said.

“Hopefully when she gets to 2000 metres she can bounce and settle midfield.”

“I think the further she goes the better she will be,” Robertson said.

“She tracked up really good today and when she went back to the inside she finished the race off very well.

“She is a mare who gives you a kick, really levels out, and she ran right through the line for a good win.

Jamie’s close friend Cliff Brown, who trains in Singapore, picked out Moralto who was bought for $35,000 as a yearling.

“Cliff is a very, very good judge of a yearling and I wish every horse in my stable was picked out by him,” Jamie said.