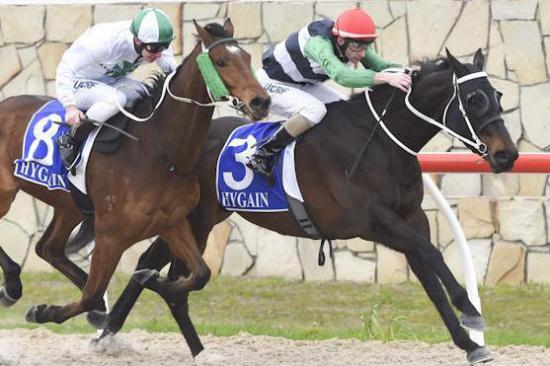 A HEAVY fog at Pakenham provided an appropriate backdrop and omen for one of the stable favourites on Friday.

London Fog had run second at five of his last six starts but seemed attuned to the conditions when he posted his overdue win in the JJ Richards Maiden Plate (2200m).

Favourite for his fifth start in a row at $2.20, he travelled well for Jamie Mott in second place most of the way and when he loomed up to the leader on the home turn it looked like his day had finally arrived.

He raced to the lead at the 200 metres and fought on tenaciously to hold off a strong challenge from Transfixed to score by a head, with Mont Laurent three lengths away in third place.

London Fog gave trainer Jamie Edwards his first win since Bruce Elkington retired from the training partnership at the end of last season.

“It looked a winnable race but when you have a horse who has placed at his last six runs and run second at five of those runs there is always a little doubt in the back of your mind,” Jamie said.

“I am rapt for the owners that he was able to get the job done after he had gone so close to winning so many times.”

Notably at three of his previous six runs, London Fog was beaten by a head or less.

He will certainly provide a talking point in the K-Rock footy commentary box for part owners Ben Casanelia, who bred London Fog, and Tim McGrath.

“They are a great bunch of blokes and he is a horse who has got a terrific nature,” Jamie said.

“You would not have find a kinder or more beautiful horse than him and he should give the owners a lot of fun.”

“He is a nice staying horse in the making.”