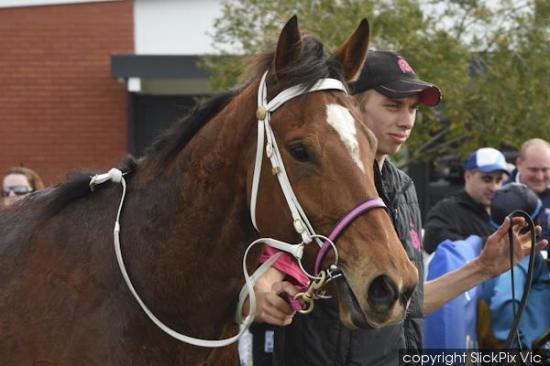 The Duke Of Marmalade 3YO gelding started $2.40 favourite and made amends for two luckless seconds at his first two runs when he ground out a 1-1/4 length victory in the APCO SV 3YO Maiden Plate (1300m). Moot was a late pick-up ride for Jake Noonan to replace the injured Noel Callow and was superbly strapped by Luke Schutlink (pictured with Moot) his first winner as raceday attendant.

Noonan made his own luck on Moot settling him just off the speed and peeled him out three-wide on the turn.

Given plenty of room, he was four-wide into the straight and seemed to take ages to win the race, only forging clear the last 50 metres to beat Black Ziggy and Desert Queen.

Prominent owner-breeder Alan Green, who part-owns Moot with Brian Singer, was on-course to see the win but revealed Moot was nearly sold last spring because of an cracked hoof.

“It was a big crack and we haven’t been able to grow the split out until this prep,” Alan said.

He said it was so bad that Moot got his name as a result of the frustration of trying to get him right.

“We were going to sell him because of the cracked hoof and because we owned the mare racing him was a moot point,” Alan said.

Moot is a son of former European champion Duke of Marmalade and Alan and Brian bought his Stravinsky dam, Silent Song, carrying him for $46,000 under The Vinery banner in 2011.

“He is a nice strong horse with a good attitude,” Alan said.

Moot’s three runs have been on the synthetic track at Geelong where he was beaten in a photo when a fast finishing second at his race debut over 1000 metres on May 15 and an unlucky neck second over 1200m when he got out too late on June 2.

Noonan said Tuesday’s race panned out nicely for Moot and “he proved the better horse”, adding that there was nice upside to him.

“He is still learning what it is all about,” Noonan said. “He is going to improve with racing and will get further.

Congratulations to his owners "Greeny", Barb and Brian Singer, longtime loyal owners and supporters of our stable.