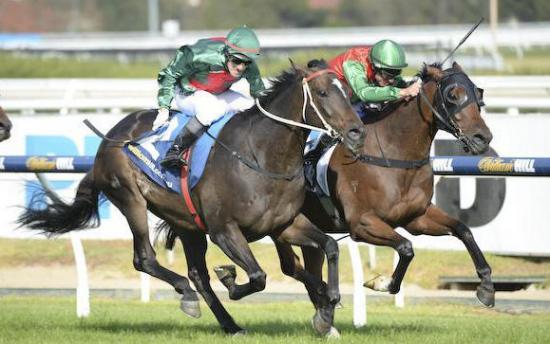 Stable star Sertorius powered home to arguably the toughest win of his career in the Group 3 Easter Cup at Caulfield on Saturday.

After a slow start, Sertorius showed great heart to run down Escado and score by a neck his first win since the Group Two Zipping Classic in November 2013.

The victory underlined the toughness of the seven-year-old who has won 10 of his 37 starts and $1,260,672 in prizemoney.

Jamie and Noel go back around 20 years when Noel was an apprentice and Jamie worked for Mick Price and Rick Hore-Lacy.

For Jamie, Noel was a logical choice for Sertorius with his vigorous riding style and it counted when the gelding was slow to begin and got back further than intended in the Easter Cup.

“Noel and I go back a long, long way and he was the perfect rider for this horse. He just kept digging to get him into the race. It was a great ride.”

As The Cleaner rolled a long in front at near record pace, Sertorius settled back worse than midfield before peeling out three-wide at the 1000 metres and making his run from the 800 metres.

“The plan was to be behind The Cleaner but he (Sertorius) didn’t break that good, which he can do,” Callow said.

“I was a pair further back than what I wanted to be, but I got cover down the back and it worked to my advantage because he’s a dead-set stayer this horse. He just keeps coming on.”

The Cleaner rolled along in front but was collared on the home turn with Sertorius threatening four-wide and two lengths behind.

With gritted teeth Callow asked for a special home straight effort from Sertorius who gradually pegged back Escado over the last 200 metres, hitting the front just before the line and recording a very quick 2m1.4s for the 2000m metres.

Jamie said Sertorius’ job was now done for the autumn with his other run a gallant second to Suavito in the Group 2 Blamey Stakes at Flemington on March 14.

“We decided this year to target the Group 2s and Group 3s with him and that’s probably more realistic,” Edwards said. “That’s his grade.

“He’s rising eight and he’s going as good ever. We’re just really lucky that his owner Mike Palmer is happy to give you a heap of time and doesn’t interfere with the training.

“It’s fantastic to get a chance with a good horse and I’m rapt the stable has been able to get him back.”

Sertorius is rising eight and Jamie said a suitable spring campaign will be mapped out for him.