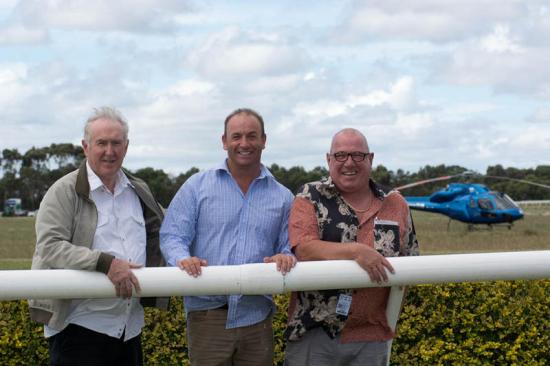 THREE owners found an unusual way to watch their grey filly Pyxis win her race debut when they were stranded in mid-air above Terang racecourse last Monday.

Simon Farrell, Terry Lyons and Paul French (pictured) flew to the track in a helicopter but were denied permission to land before the race because the horses were already in the mounting yard.

The three men had to place their bets on mobile phones and then watched in anticipation as the runners jumped from the gates in the Terang Co-Op Plate (1006m).

Jockey Craig Robertson rode to instructions, having the three-year-old filly settling just off the pace and reserving her best for the home straight, but her owners in the helicopter lost sight of her soon after the start when Robertson’s white cap blew off.

It wasn’t until checking the race result on a mobile phone that they were able to confirm Pyxis had won easily at the juicy odds of $11.

A daughter of Dubleo, Pyxis is a half-sister to six-time winner Testanova and Kaptain Kosmos, who won three races for the stable.

Jamie said Pyxis’ race debut had been delayed because of couple of minor issues but she was now over them had won a Geelong jump out at Geelong on February 18, which featured on the Emsley Lodge Video report.

“On the training track she is one of the fastest horses we’ve got,” Jamie said.

“She is very, very fast for 600 metres but tends to be very weak at the end of her gallops so at Terang we instructed Craig (Robertson) to ride her quietly early and let her get home.”

Pyxis was eager to go faster settling just off midfield to the home turn, and when hooked out showed outstanding acceleration at the 400 metres, collaring the leaders in a few strides and racing away to a 4-1/2 length victory over Bel Air Miss.

“She was fantastic the way she put them way very quickly, and she ran a bit of time (58.37s) as well,” Jamie said.

“She is very promising and I think she will be better suited up in grade with strong early speed which will help her settle better.