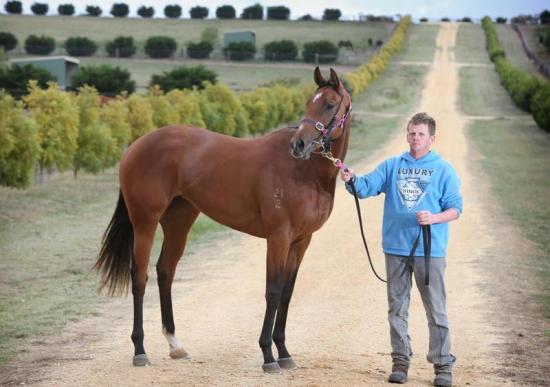 Freshwater Creek trainer Jamie Edwards is pretty sure he knows which way to go with rising star Eolande.

But today's test in the Group 2 VRC Sires produce (1400m) will be confirmation. Edwards is set on heading to a 1500m race on Mornington Cup day, but a win or even top three finish today could change his plans. "We didn't want to be a month between runs (going into Mornington) and jumping from 1200m to 1500m. We wanted a race in between and we thought this would be a nice race" Edwards said. "It would be lovely to be competitive in one of these and then go to the (Group1) Champagne Stakes. But that's all pie-in-the-sky stuff. At the moment she's a progressive horse that has coped with everything".

Eolande made good ground when finishing third with Craig Williams on board at Sandown last start. The champion hoop is sticking with the two-year-old and Edwards expects a good run from barrier six."She has learnt to jump and settle," he said. "If she picks up a cheque it would be a bonus".

Edwards admits Eolande may be caught out of her depth so early in her career, but he knows how fickle two year old racing can be."There are horses here that were competitive in the Blue Diamond. But the upside is that race was their grand Final. She goes in on the way up rather than peaking and then being on the way down".