Tale to tell at the 'Bool 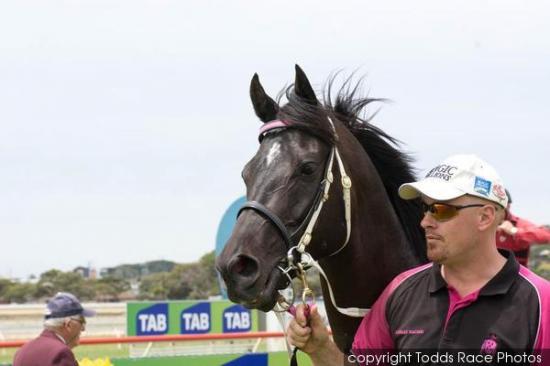 Magic Millions graduate Tejano’s Tale has emerged as a promising young staying prospect posting his maiden win at his first test beyond a mile at Warrnambool on Tuesday.

The three-year-old was immature when he finished last as an early two-year-old in the Magic Millions Prelude at Ballarat in November 2013, but is now living up to his striking looks and should train on to longer races.

Co-trainer Jamie Edwards tipped Tejano’s Tale on the weekly Emsley Lodge Report and stable followers were celebrating when he paid $14.80 for his win the Westvic Equine Dentistry Maiden Plate (1700m).

Stable apprentice Josh Cartwright gave the son of Tale Of The Cat the perfect run behind the leader on the rails and peeled out on him in the straight to make his winning run.

He took the lead near the 100 metres and ridden out hands and heels over the closing stages held off the fast finishing odds-on favourite Chu Chu Charlie to score by a head although Josh says the margin should have been much bigger.

“He should have won by about two lengths but when he got to the front he baulked a bit,” Josh said.

“He will probably be a lot better with the blinkers on.”

Tejano’s Tale is the first the runner from American mare Tejano’s Oasis who won seven races to 1700m including the Listed Iowa Oaks.

Being a jet black, spunky, little colt Tejano’s Tale caught the eye at the sales, costing $60,000, but in reality was always going to need time.

“He needed time so we gave him a really long break, taught him how to settle, and it is now paying dividends.

“His work was really good leading up to Warrnambool and we were confident when would run well.”

At his other two runs this campaign he finished down the track over 1207 metres and 1540 metres at Kilmore and Geelong respectively, but the tempo over 1700 metres suited him much better.

“It was good to see him jump out and travel like he did,” Josh said.

“He has been a under pressure in his races over shorter distances but showed that he will clearly get a trip.

“He has no problems at all settling and for little horse he can really let rip over a distance.”

Jamie said Tejano’s Tale would progress to 2000 metres next start and he believes that potentially he will run a strong 2400 metres.

“Now he’s got his head around staying I think he will be okay,” Jamie said.

“He is no super star but he will win a couple more races.”