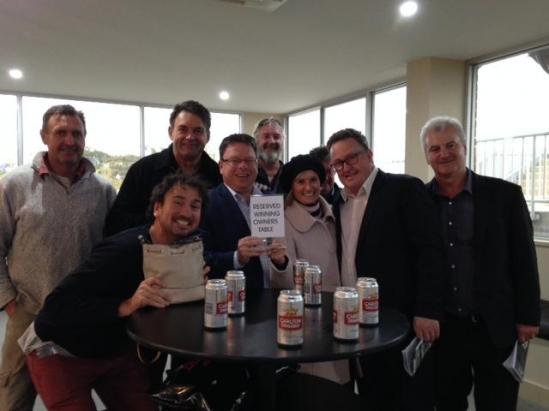 Lightly raced Bel Esprit gelding Froffy regained his best form after a frustrating back injury with an outstanding all the way win at Geelong on Tuesday.

The four-year-old received a tumultuous reception from a large band of owners who were on course to witness the victory in the Ritchie Brothers Auctions 0-58 Hcp (1000m).

Co-trainer Jamie Edwards said that getting Froffy's confidence back was the key and the facilities at Emsley Lodge had been important in his rehabilitation.

"We are lucky having the farm which is a great help to horse’s if they have problems like Froffy did with a really bad back injury," Jamie said.

"It is a credit to the farm and our staff that we were able to get him back to winning form."

Jamie said the signs were positive last week when Froffy produced one of best ever track gallops.

"He hadn’t seemed to be the same horse for a long time but we took all the gear off him and gave him a couple of gallops with pain killers to get his confidence back and last week was the first time since the injury I have really seen the him really let right down."

On Tuesday, jockey Dean Yendall was determined to get a good clean start from barrier one, and punters were queuing up early after backing Froffy from $8 to $4.60.

"I rode him a couple of starts ago at Warrnambool and he did a few things wrong and couldn’t get anywhere near them, but I made sure he was on his game today,” Yendall said after the Geelong win.

"I got up him going around to the barriers just to let him know I meant business and I gave him a smack around the backside going into the barrier."

Shouldering 60kg, Froffy bounced straight to the front and was never headed scoring by two lengths from Harold Bluetooth and Shimoda.

Froffy has now won two of his eight starts with his other victory being at his race debut at Terang in February last year.