Bred to win a Classic 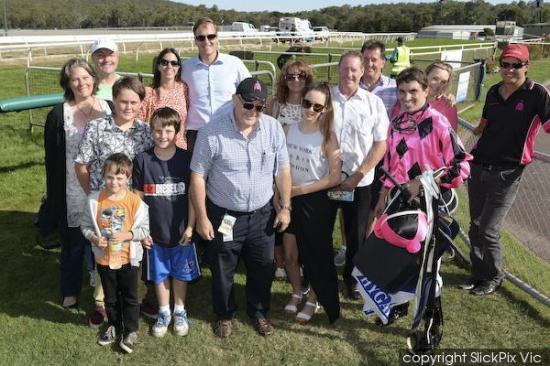 Well bred filly Kawabata underlined her class with an emphatic win against older horses in her first staying test at only her third race start at Kilmore on Monday.

Co-trainer Jamie Edwards is excited about the prospects of the daughter of Encosta De Lago who has the pedigree to win a classic being the only foal from ill-fated 2008 Queensland Derby and Oaks winner Riva San.

“To win over 1912 metres at only her third start against older horses is a significant achievement and the sign of a high class stayer,” Jamie said.

Kawabata also beat the older horses when she won a 1612-metre maiden at her previous start at Kilmore on January 4.

“Even though she has won lowly graded races she is beating them convincingly and when she gets to a longer trip she is going to be even better,” Jamie predicted.

“I’m now pretty excited about getting her back to three-year-old grade as she looks an Oaks type filly.”

Jamie said Kawabata’s next start in the city over 2000m would determine the direction she takes.

“That will be her first real test in good company and if she happens to win that we will give her a crack at some black type races,” he said.

Jamie flagged next month’s Tasmanian Oaks (2100m) at Launceston and the SA Fillies Classic (Oaks) over 2500 metres on May 16 as possible options.

“She’s a similar type to her mother and it would be great if she could win a good race,” Jamie said.

“Whether she is up to a Queensland Oaks remains a query at this stage, but we are not ruling anything out at the moment.”

Kawabata is progressing quickly and on Monday at Kilmore was impressive racing just off the pace and finishing strongly to score a length win over Big Brom in the Corsec Services BM64 Hcp (1912m) on January 19.

Jockey Reece Wheeler has ridden Kawabata at her last two starts and said the extra distance suited her.

“Now they are not going so quickly she is able to balance up and travel into the race a bit better and let down properly,” Wheeler said.

“She took a bit of winding up over 1600m at her previous start but travelled into it better over the extra ground this time.

“There is quite a fair bit of upside to her and she is only going to get further.”

It is all good news and exciting times ahead  for her very patient owners.