Four Days gets a second Life 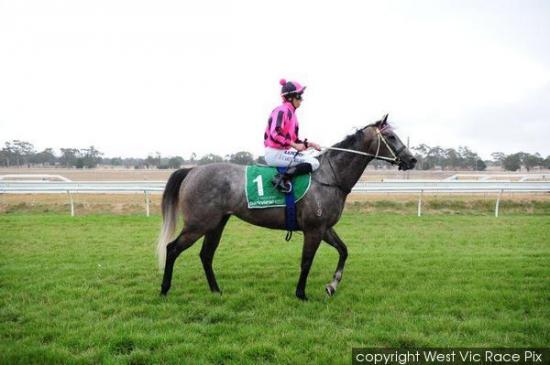 UNDERRATED galloper Fourdays Of Mylife has quickly found winning form with a change of environment at Emsley Lodge proving ideal for his arthritic joints.

The grey has had only three starts for the stable and stamped his class second up from a spell when he overcame a wide run unleashing a brilliant finish to score at Stawell on Friday.

After his unlucky and close first up sixth at Warrnambool, the stable was confident Fourdays Of Mylife would win The Views Restaurant BM64 Hcp (1100m) but he had to it the hard way.

Stable apprentice Josh Cartwright rode the grey who travelled well just behind the leaders three wide to the turn where he was carried seven-wide.

King Of Finland railed through to lead at the 150m, but Fourdays Of Mylife’s was equal to the challenge and ran him down to score in a photo finish.

With a different passage the margin would have been far greater and co-trainer Jamie Edwards is excited about what the gelding may do this preparation.

“He has pulled up great from the run and the way he is going he should win three or four races this time in,” Jamie said.

“I would really like to get him to the city because  I’m sure he can win in town.”

Chris Romanidis, who owns Fourdays Of Mylife with Kevin Cordina and Mick Nikolovski, has always believed in the gelding’s ability.

When he’s right he knuckles down and gives you everything he’s got.”

Chris has been hands on with horses since he was 14 when he bought a hack at the Dandenong Market, later progressing to become a successful harness racing trainer-driver before pre-training horses and establishing the Lara Equine Lodge.

His connection with the Edwards family goes back a lot of years and he knows that Jamie will do his best for Fourdays Of Mylife.

“Jamie is a very capable person and a good trainer and he calls the shots,” Chris said.

He said Fourdays Of Mylife “absolutely loves the whole environment at Emsley Lodge” where he enjoys most of his time in the paddock.

“I think being out on the paddock where he can walk around is the best thing for him as he keeps moving all the time which is good for his joints,” Chris said.

Fourdays Of Mylife is only lightly raced for a five-year-old with four wins from 15 starts, but Chris has always loved the gelding who was one of five horses he prepared for the sales at Scone.

As fortune had it Chris bought Fourdays Of Mylife after he was passed in for $4000 and then named him.

“It took us four days to go up to Scone and come back and a mate of mine was walking past his box and said your horse owes me four days of my life,” Chris recalled.

“It sounded like a good name and we got it.”