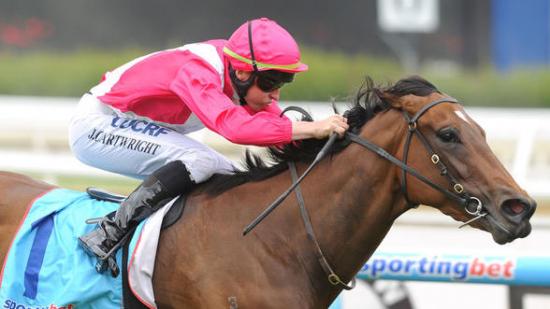 Josh, 20, rode seven winners from 17 rides across four Saturdays at Morphettville from November 1 to November 22 giving him big hopes of out riding his city claim in the next 12 months.

Last Saturday he rode a treble in Adelaide and carried that form back to Victoria where he rode another four winners in three days comprising a double at Kilmore on Sunday and wins at Warrnambool on Monday and Moe on Tuesday.

His Warrnambool victory was aboard the promising Emsley Lodge four-year-old Freedom Beckons.

His recent winning run follows his battle with haemochromatosis (inherited elevated iron levels in the blood) which he has been able to control after increasing his riding weight to 56kg in the last month.

"I am heavier but feeling much better," Josh said.

"My fitness is really good and I'm extremely confident after the successes I've had in Adelaide."

Josh attracted the attention of Adelaide trainers when he won on Ilgatino for Geelong trainer Kelvin Bourke at Morphettville on November 1.

The following week he returned to Adelaide for three rides and landed a double for Lloyd Kennewell on Silent Whisper and the highly talented Nite Rocker.

A week later his book swelled to five rides and he was again successful for Kennewell on Baligari, and posted seconds in two other races.

He was placed on six of his seven rides last week, including a winning treble on Kennewell-trained stablemates  Jennyfromtheblock and Silent Whisper, as well as the Phillip Stokes-trained Eclair Samba.

Victoria's premier country apprentice the last two years, Josh now plans to ride in Adelaide every Saturday in his chase for the 51 city winners he needs to extinguish his city claim before the end of next year.

"My goal is to outride my claim and to do that I am forgetting about Melbourne on a Saturday," said Josh who has ridden more than 150 winners in his career.

He said his focus would be on midweek meetings at Sandown, Moonee Valley's Friday night meetings and Saturday meetings in Adelaide.

“Riding at 56kg limits my options at Saturday meetings in Melbourne, especially with some really strong apprentices there who can ride 51kg and 50kg, but I'm a good chance of out riding my claim if I stick by those Adelaide trainers who have looked after me," Josh said.

He said the weight scale in Adelaide worked in his favour and gave him opportunities on the best horses over there.

In-form trainer Lloyd  Kennewell is a Cartwright fan, and with good reason.

Josh has a perfect record of five wins from five rides for Kennewell who has prepared seven winners from his last 12 runners.

“I watched him win on Ilgattino and thought he looked pretty good on them, gave him a ring and got him over,” Kennewell said.

“He’s five from five on my horses and I couldn’t be happier with him.